Gold edges up to a new record 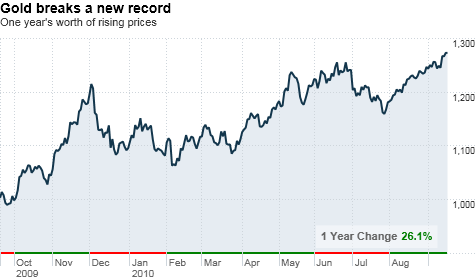 Gold prices have been riding a wave of economic uncertainty. Jono Remington-Hobbs, a precious metals analyst for the TheBullionDesk in London, said the big drivers are economic uncertainty, volatility in the currency markets and the possibility of more quantitative easing -- meaning the buying of bonds by the U.S. government.

Despite the announcement by the National Bureau of Economic Research that the recession ended in June 2009, Remington-Hobbs said he believes that uncertainty will continue to drive gold prices.

"I think there's a strong chance that gold will get close to touching $1,300 [per ounce] in the next month or two, actually," he said.

Gold prices have climbed 26% over the last 12 months. But in actuality, prices are a far cry from their true record, when adjusted for inflation.