Emerging markets can't save the world 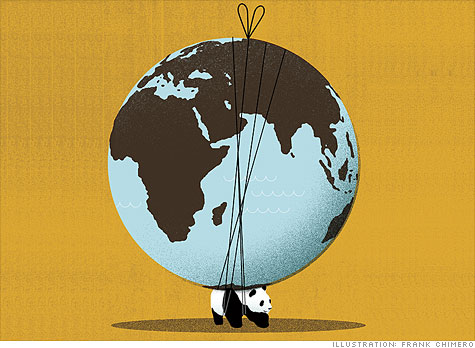 (Money Magazine) -- Forget fear of the unknown. You should really worry when all of Wall Street agrees on the merits of an investment idea. Case in point: emerging-market stocks.

At a time when market watchers are bracing for another bout of volatility, the consensus among money managers is that you should gravitate toward what has always been one of the most volatile investments around: shares of fast-growing companies in emerging economies like China, Brazil, and India.

The argument actually seems sensible. As the global recovery decelerates, economies in emerging markets keep expanding fast. Gross domestic product in China, for example, is expected to grow at more than triple the pace of that of the U.S. this year.

Emerging-market countries have burgeoning middle classes, and their balance sheets are better than those of developed nations. Sounds close to ideal. Indeed, over the past 12 months emerging-market stocks are up 21%, compared with 9% for the S&P 500 (SPX).

Unfortunately, says Mark Eibel, director of client investment strategies at Russell Investments, history shows that "anytime everybody seems to be on the same side of an argument, you need to be cautious."

Remember how technology stocks were supposed to defy the traditional business cycle? Or how home prices couldn't fall since people always need a roof over their heads? What's more, there are fundamental reasons to question the emerging blind faith in emerging markets:

1. You've heard this argument before.

Only three years ago the bulls were arguing that emerging economies had "decoupled" from the rest of the world. In other words, China no longer needed strong growth in the U.S. or Europe to prosper since the country's own consumer class was expanding so quickly.

Of course, that argument collapsed in 2008, when shares of Chinese and other developing-market companies fell harder than the S&P 500. They also, by the way, performed worse in the bear market of 2000 - 2002.

Three London Business School scholars studied the performance of stock markets going back to 1900 and discovered something surprising: Gains in countries with the lowest GDP growth were greater on average than returns generated by stocks in the fastest-paced economies.

It's not clear why that happens, but one possibility is that investors ignore stocks in slow-growing countries until their equities become screaming bargains. Then buyers start bidding up prices.

Historically they have traded at nearly a 20% discount to U.S. shares. Today the price/earnings ratio for the MSCI Emerging Markets index (EEM) stands at 15, vs. 14.5 for the S&P.

"That crossover point has been a danger sign," says Simon Hallett, chief investment officer for asset-management firm Harding Loevner. Each time emerging-market stocks traded at a premium in recent years, they underperformed domestic equities over the next 12 months.

None of this is to say a China crash is imminent. But if you're thinking of boosting your stake, wait. Arjun Jayaraman, co-portfolio manager of the Causeway Emerging Markets fund, notes that in the event of another global selloff, there's a good chance "emerging markets will get hit and possibly hit harder than developed markets." That, he says, could be a buying opportunity.

On the other hand, if you've been bulking up on emerging markets, take some profits. No more than 25% of your international holdings should be in these stocks, and given valuations, less is probably better. In the meantime, don't be afraid to make an indirect -- and potentially safer -- bet through U.S. and European multinationals, Hallett suggests.

He notes that companies such as Unilever (UL) and Nestlé (NSRGY) generate more than a third of their sales in emerging markets.

While you may think such a strategy would deliver less than a direct investment, consider this: If the bulls are right, and the risks of emerging markets have diminished, shouldn't returns start to fade too?

ETFs: Short term or for the long haul?

Why dividends are sexy again
Subscribe to Money
First Published: September 24, 2010: 4:49 AM ET