'I'll work till I die': Older workers say no to retirement 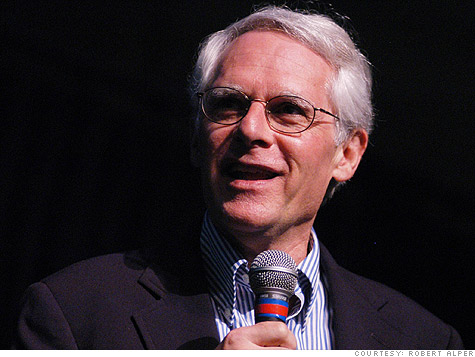 NEW YORK (CNNMoney.com) -- Gone are the days of golf and gardening into the golden years. Many older workers are working well into retirement and it's not just because they have to, it's because they want to.

Bob Alper, who has supported himself as a full-time comedian since 1986, says even at 65, retirement never crossed his mind. "I live for the moment when I can get up on the stage and make people laugh," says Vermont-based rabbi-cum-comedian who performs 60-70 shows a year at colleges and synagogues across the country.

And Alper is not alone. The number of workers 65+ who are choosing to keep working has been on the rise for more than two decades.

Even the wealthy are reluctant to retire from the workforce, according to a report released on Sunday by Barclays Wealth. Half of the high net worth respondents over 65 surveyed said they will always be involved in commercial or professional work of some kind.

Dubbed "nevertirees," many wealthy individuals will never stop working, the report said, even if they have little financial need to do so. Like Alper, they want to keep doing what they are doing for as long as possible.

7 secrets to a richer retirement

"There was a general upward trend of labor force activity among older workers before the financial collapse," explained Alicia Munnell, director of the Center for Retirement Research at Boston College. "People were getting healthier and living longer."

Mark Miller, author of The Hard Times Guide to Retirement Security, said boomers began viewing the retirement years differently well before the recession took hold. "Many were committed to staying engaged. ... The whole idea of working longer, even for a handful of years, can be tremendously beneficial to your mental well being."

But the current dour economic climate has also forced many older workers to push back their retirement plans out of financial necessity.

In the recession's wake, home valuations, stock portfolios and retirement accounts have been depleted. Meanwhile, the cost of health insurance has increased dramatically, leaving many workers with no other alternative but to hold on to the jobs they have.

"The economy has now made working longer a real imperative," Miller said.

"I expected I would retire at a normal age but the business took a lot longer to get to a point where it would be marketable. Now I really can't retire until the business is valuable enough for me to sell it." McCabe, who has cashed in his 401(k) to make payroll, estimates that it will be least five years until he can consider retiring.

McCabe's wife, Marilyn, also 65, even passed up her own retirement after a career in human resources to work alongside her husband and help build his tax practice. "She'll be working with me until we sell the business," he said. "I think she would like to be retired now."

Like the McCabe's nearly half of those ages 65 and older report being behind in terms of retirement preparedness, according to a recent survey by TD Ameritrade.

"We are entering a stage, given the heightened longevity and our changing economic circumstances, that people will continue working," according to Marcia Wagner, managing partner of The Wagner Law Group, a Boston-based law firm specializing in the Employee Retirement Income Security Act.

Wagner admits she has no plans to ever retire either -- but, like Alper, by choice. "I will work till I die because I like what I do."