Is the Fed playing with fire? 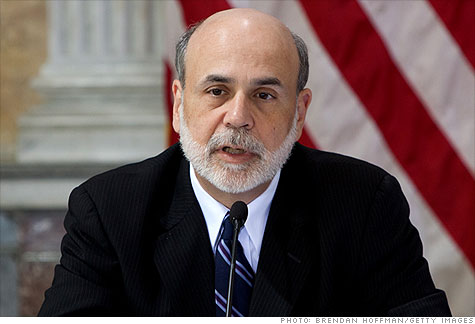 New York (CNNMoney.com) -- The Federal Reserve is about to throw some more fuel on the fire it has been stoking for more than two years.

But the expected move to pump more cash into the system might not do much good at this point, and the economy could get burned in the process.

The central bank has pumped about $2 trillion into the economy since the recession began in September 2008, in a process known as quantitative easing -- massive purchases of financial assets, like mortgages and Treasurys, designed to encourage spending through lower interest rates.

Now, as the Fed prepares for a two day meeting the first week of November, top officials are sending clear signals that more purchases are on the way.

"Further action is likely to be warranted unless the economic outlook evolves in a way that makes me more confident," said William Dudley, president of the Federal Reserve Bank of New York said last week.

In remarks Monday, Chairman Ben Bernanke said of the possibility of future purchases, "I do think they have the ability to ease financial conditions."

But further Fed action comes with a number of risks, and not everyone is eager to see another round of quantitative easing. Here are the dangers:

Another bubble. The idea behind asset purchases is to flood the economy with money, which would lower interest rates and spur more lending and spending.

But new asset bubbles could form if the Fed doesn't start backing away from its policy of easy money -- often thought to be the source of the housing bubble which caused the recession in the first place.

And there are already troubling signs of possible new bubbles, like increases in the values of various assets from Treasurys to gold to other commodities.

A falling dollar. At the last Fed meeting policymakers said prices were too low, and signaled they were ready to take action if necessary.

That caused a drop in the value of the dollar, as investors fear the currency will lose value in the future. That day, the dollar fell about 1% against the euro, and almost 4% more since then.

If more confidence is lost, a downward spiral for the greenback could raise prices by making the cost of various commodities and imports, such as food and oil, more expensive for Americans.

That could also drive up interest rates, as overseas investors financing U.S. government debt would demand higher rates to compensate for expected declines in the dollar.

Higher rates could lead to a host of problems, like making business and consumer loans more expensive. And it would hurt the value of the Fed's huge asset holdings.

It won't work. There are fears that rushing to buy additional assets will do little to spur hiring or spending in an economy already awash in excess cash, one in which nervous consumers are saving more and paying down debt.

"Asset purchases in our current economic environment can do little if anything to speed up the return to full employment," Philadelphia Fed President Charles Plosser said in a speech last week. "Because I see little gain at this point, and some costs, I would prefer not to engage in further asset purchases at this time."

Many economists echo Plosser's doubts about the Fed being able to jumpstart the economy with more money.

"I think the impact [of additional purchase] will be minimal," said Bernard Baumohl, executive director of the Economic Outlook Group.

Even if asset purchases lower interest rates, Baumhohl said, banks are still reluctant to lend and both businesses and consumers are still too nervous to take on more debt.

So lowering rates feeds the risk of inflation down the road without solving the problem today.

"We are following policies that unless changed will eventually lead to lots of inflation down the road," said Warren Buffett at Fortune's Most Powerful Women Summit Tuesday. "We have started down a path you don't want to go down."

The risk of doing nothing. While the economy remains fragile, sitting on the sidelines isn't a safe option either.

There are growing concerns of a double-dip recession or a deflationary spiral that could hurt economic growth for years to come. A recent poll of top economists by CNNMoney found nearly twice as many worried about deflation than a return of inflation.

With inflation currently near zero, many fear that a downward spiral in prices is a serious threat.

"Once deflation gets going, it's very hard to stop," said James Hamilton, economics professor at the University of California at San Diego.

Even having very low inflation can cause problems for the economy, he said. "As long as we have inflation this low, people have an incentive to hoard cash rather than putting it to work constructively."

He argues the weak economy warrants immediate action, despite the risks, and supports another round of asset purchases.

"We have to balance those worries about negative consequences with worries the economy faces right now."