Chipotle: Rise of a fast-food empire 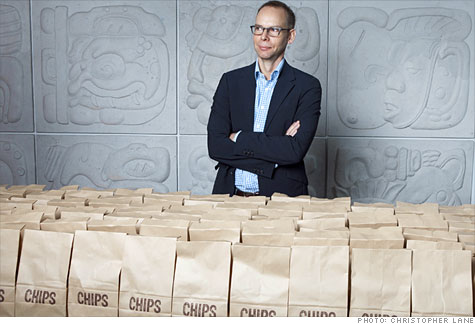 FORTUNE -- As a kid, I watched Julia Child and Graham Kerr, the Galloping Gourmet, on television while my friends were watching cartoons. In grade school I learned how to make hollandaise from my mom, and during high school in Boulder I started throwing dinner parties and collecting cookbooks. After college I went to the Culinary Institute of America [in Hyde Park, N.Y.] and then to San Francisco to work at Stars restaurant. I aspired to have my own restaurant, but quickly realized I didn't know the economics of full-scale restaurants.

One day, while sitting in a taqueria called Zona Rosa close to my house, I watched how the line crew took care of people in very short order. I took out a napkin and jotted down what I thought the average check was and how many people were going through the line, and I timed it. I thought, Wow, this thing makes a lot of money -- it could be a little cash cow that could fund my real restaurant. My dad gave me $85,000 -- part loan, part equity. I packed up within a couple of weeks and drove back to Colorado. It was the summer of 1992. The first Chipotle opened in Denver on July 13, 1993.

The tipping point came in October, when the restaurant reviewer from the Rocky Mountain News gave Chipotle (CMG) an A rating and described how we made the marinade to grill the chicken, how we used only the ripest of avocados -- all the little details.

After that people came from all over Denver, and down from Vail and Aspen. Suddenly the line was out the door and down the block.

Don't bow to convention. When I started Chipotle, I didn't know the fast-food rules. People told us the food was too expensive and the menu was too limited. Neither turned out to be true.

Find incentives that work. The best Chipotle restaurant managers get the title "restaurateur" and a $10,000 bonus for each person they hire who starts as crew and goes on to become a manager. We have 170 restaurateurs out of 1,000 managers, and the turnover rate among them is very low.

Pick the right message. I thought we were going to get customers excited by telling them there were no antibiotics in our meat or no growth hormones used to raise the animals or no RGBH in our cheese or sour cream. Well, that's not a very appetizing message. So now we have a marketing program that's going to start a dialogue about why better ingredients make for better-tasting and more healthful food.