Forget it. You're not getting your house back 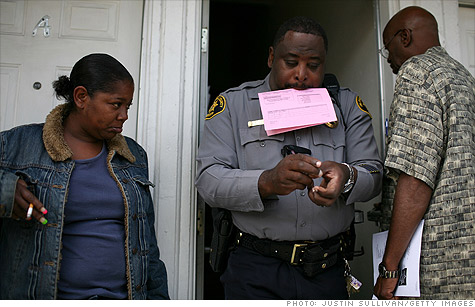 NEW YORK (CNNMoney.com) -- Is this the break that millions of people have been hoping for?

Evidence continues to mount that major banks flouted their own foreclosure procedures -- and possibly the law -- when repossessing homes from owners who fell behind on payments.

And that begs the question: Can owners who were wrongfully evicted take their home back? What if a new owner has already bought the place and moved in?

That's the messy scenario that lawyers, banks and hordes of ex-homeowners are facing, after revelations that loan servicer employees might have signed off on documents without a proper review, a process dubbed "robo-signing."

Experts say that very few homeowners will ever get their houses back. The possible exception: The handful of people who were wrongfully swept up by the mortgage tsunami, despite the fact that they were current on their payments.

But getting a judge to unwind a foreclosure is tough.

"The law imposes a very heavy burden on those seeking to attack final court judgments," says Robert Lawless, a professor at the University of Illinois College of Law.

If a court does rule a foreclosure invalid, either because the lender didn't have the paperwork in order or because the mortgage was not actually in default, a home's title will revert to the original owner, even if the property has since been purchased by a third party.

So where does that leave the original homeowners? It's difficult to say, because this is truly uncharted territory, and because foreclosures are subject to state laws, which vary widely.

But one thing is clear: If the original homeowner doesn't have the cash to catch up on the mortgage, the lender will restart the foreclosure process and, with the paperwork in order this time, repossess the house.

"The bottom line is that for the vast majority of these cases it's just going to delay the inevitable," said George Craft, a Texas based real estate attorney.

The new owner should be able to stay in the house while the second foreclosure works through the courts because by this point, the original homeowner has probably found a new place to live.

Even someone who was wrongly evicted has probably found a new home and would prefer to take a cash settlement rather than try to reclaim their house. Most of these homeowners will almost certainly sue their lender, which is of course exposed to a tremendous amount of liability.

"Monetary damages will be the way people are compensated, because it's much easier for courts to monitor and institute," according to Andrew Raines, a California lawyer who specializes in real estate.

In the rare case that a foreclosure victim does want a house back after a third party has moved in, the new buyers will be compensated by title insurance.

Almost all lenders require mortgage applicants to purchase title insurance, which is designed to guard against gaps in the title record due to human error. If a title reverts to the original homeowner, title insurance should cover any financial loss incurred if the new owner is ordered to vacate the house.

Of course, that might not be the end of it -- there will probably be a flood of lawsuits bouncing between victims, title insurers and lenders that will further jam up a system that's already backlogged.

"One of the best and worst parts of our judicial system," said Lawless, "is that anyone has access to the courts to assert their grievance against another."

Will JPMorgan face facts on foreclosures?