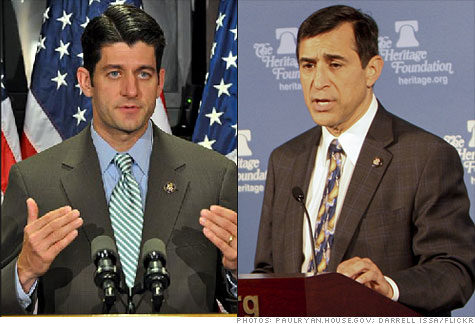 FORTUNE -- Two of the most important figures to emerge if Republicans take over the U.S. House aren't on election-day watch lists: Paul Ryan of Wisconsin and Darrell Issa of California.

Both are Capitol Hill veterans, not members of the much-scrutinized contingent of about 60 newcomers endorsed by the Tea Party movement and seeking House seats. But both men are Republican renegades who will be aptly positioned to channel Tea Party-movement energy into blocking President Obama's agenda.

Ryan, the best known of the pair, is in line to become chairman of the House Budget Committee -- ground zero for the government spending concerns that animate Tea Party activists. Inspired by thinkers like Milton Friedman and Friedrich Hayek, the 40-year-old issued a call-to-arms, called Roadmap for America's Future, that rattled establishment Republicans in its unabashed free-market approach to, well, everything.

Ryan, for example, wants to upend government aid programs with vouchers and tax credits to allow families to buy their own Medicare plans, private health insurance and retirement accounts -- letting individuals, rather than the government, take more responsibility.

As a Tea Party hero, he'll be the House member grass-roots activists turn to as the President's deficit reduction commission issues its advice in a few weeks on how to control entitlement spending. And Ryan's first order of business as budget chairman will be producing a federal budget with sharp spending reductions in discretionary spending.

Democrats will still control the White House, and likely the Senate, so there's no clear sledding for any of Ryan's proposals. But with Tea Party activists intently watching the new Congress -- from inside and out -- the volume will be turned up on Ryan's ideas -- and therefore his ability to shape the debate.

"We used the inside-outside model," former House Majority leader Dick Armey, now a Tea Party organizer as chairman of the Washington-based FreedomWorks, tells Fortune. "First, protest bad policies. Second, affect the outcome of elections. Third, involve yourselves in governance by saying to someone like Ryan -- 'we appreciate your work and will encourage others to appreciate it.'"

By "others," Armey means moderate Democrats -- and just as importantly -- Republican leaders and Republican incumbents. "You start a large and assertive echo chamber" so that when members return to their districts they start getting questions about the Ryan plan, explains Armey. "His ideas will be taken more seriously if there are outside forces [agitating] and direct pleas to members. Republicans have been too timid to make his arguments. Now those same ideas have a ready-made audience."

Ryan can also throw his enhanced political weight around during the upcoming debate on extending the Bush tax cuts. Since he wants to eliminate taxes on capital gains, dividends, and interest, and abolish the corporate and estate taxes, it's not hard to guess where he'll stand on whether dividend taxes should doubled or capital gains raised to 20% from 15%.

Answering the call for investigations

Ryan is a lifelong government policy wonk who started his career on a Capitol Hill staff. By contrast, Darrell Issa, 57, is the wealthiest lawmaker in Congress. He made his fortune in car alarms, and featured his own voice demanding "STAND BACK" in the Viper system.

The San Diego lawmaker will wield his power from the chairmanship of the House's main investigative panel, the Committee on Oversight and Reform. As the chamber's chief investigator-to-be, Issa has been walking the activist-walk and talking the talk for some months. "We have to say to the Tea Party: You're not strident enough, you're not angry enough and the government has gone far enough," Issa recently told delegates at a state party meeting. "We've already squandered the legacy of our parents."

A staff report from Issa's office suggests the direction that he will take as chair of that all-important committee. A list of hearings that he requested -- and which were ignored -- under Democratic rule included failures in homeland security (especially the Fort Hood shootings, the Christmas Day attack, and the Times Square bombing attempt); the $148 billion (so far) government conservatorship of Fannie Mae (FNMA) and Freddie Mac (FMCC) "despite the role they played in the financial crisis and the huge financial stakes of the American taxpayer"; federal healthcare waste and abuse; and wasted stimulus dollars.

Issa is neatly positioned to tap into Tea Party anger over the size, scope and expense of government. But Armey issues this warning to him: "If he gets infatuated with going after personalities instead of programs, he'll get public disapproval. He needs to do the hard, rigorous work of disciplining agencies."

Trade and Tea Party: Not exactly a happy couple

Help Desk
Track testing tires to find the best
Find out how TireRack tests and reviews tires and why choosing the right ones for your car is so important. Play
Markets
Data as of 2:44pm ET
Data as of 4:30pm ET
Sponsored by
Sponsors
Sections