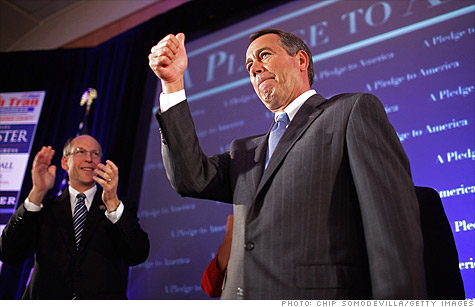 Welcome to the job! Uh, I think. Of course, Republicans must be thrilled to have taken back the House and all.

But let's get real, at times like these, being in charge isn't all that fun. And if you do it right, it will be really tough. So assuming you don't want to call for a recount ...

My advice comes from someone terribly worried about the fiscal direction of the country. I don't care which party holds the majority. Consult your political advisers for the other side of what I am about to suggest. (The deficit debate: Game on)

Fixing the economy: We are in real bind here. The truth is that things probably won't get all that much better anytime soon.

So when it comes to talking about where we are headed, don't over-promise: Manage expectations.

After years of overspending at the household level, and decades of overpromising at the government level, we have a lot of digging out to do. At the same time, the economy continues to face many vulnerable spots. A nuanced response is in order.

In the short run, the economy needs more stimulus. Sorry, I know that word doesn't travel well in your circles, so call it what you want. Business investment. A downpayment on growth. Innovation policy. Whatever.

GDP is well below potential and something will have to fill the gap.

Focusing on incentives to promote business spending and investment would probably dovetail best with your agenda.

But while stimulus spending is politically desirable because it comes from borrowed money -- so, for instance, you get to cut taxes without offsetting the costs -- that borrowing must only be temporary. This is not an excuse for permanent, deficit-financed tax cuts.

Speaking of which, I realize I'm not going to convince anybody to stop pushing to make the Bush tax cuts permanent, but just between friends, we all know that these tax cuts are not the best way to stimulate the economy, nor are they the centerpiece of any real effort at fundamental reform in the longer run.

If you do proceed with making some or all of the tax cuts permanent, it will only make fixing the deficit and debt problem all the more difficult. And you can't fix the economy if you don't fix the debt problem.

That brings us to controlling government spending.

Reforming spending for real: No question about it --government spending is projected to grow out of control. As soon as the economic recovery takes hold, the focus has to be on bringing spending back down to more manageable levels.

Unfortunately, the solutions offered on the campaign trail won't do it. The heart of the problem is entitlement spending, and the Pledge to America only mentions entitlements twice. TWICE. Come on now. I fear you will have a tough time fixing government spending if you are scared to even discuss it.

Paul Ryan, your colleague from Wisconsin, has been a real hero on this topic, laying out his ideas for long-term entitlement reform. But one of the most frustrating things during the election was watching members of both parties run away from these ideas without introducing alternatives of their own.

If politicians are too scared to talk about how to fix Social Security, Medicare, and Medicaid, we are truly headed for trouble. It is time to drop the focus on things like earmarks and repealing TARP and focus on where the real money is.

I know, I know, no new taxes. But how? I have no problem with the concept of not raising taxes. I personally prefer a smaller government (though I'd make it more progressive, especially on the spending side.) But if you don't want to raise taxes, and you don't want to march us towards a nasty fiscal crisis, I am hard pressed to see how you get there.

I, along with a colleague, Bill Galston from the Brookings Institution, offered a plan to fix the budget over the next decade by first going after spending and then filling in the gap by raising revenue. Let me just say, the more specific you get, the harder it gets to find those savings.

We need a plan on how to go after spending. But until someone develops a viable one, it is just irresponsible to take taxes off the table.

Time to get specific: You have made a number of courageous and important comments recently. You suggested that we should be open to raising the retirement age, reforming tax expenditures, and only temporarily extending the tax cuts. We need more of this kind of honesty and specificity.

As I see it, the two most likely scenarios are absolute fiscal gridlock and showdowns early next year when Congress has to prepare a 2012 budget and raise the debt ceiling. (While I have you: You should tie an increase in the ceiling to agreement on a reasonable debt reduction plan.)

By the way, this will end badly when financial markets turn against us, which they certainly will if we don't put a long-term plan in place.

The good news is there's an alternative: We could be pursue bipartisan cooperation and put in place a reasonable budget plan that is phased in gradually. It would involve freezing discretionary spending, including defense, reforming Social Security, slowing the rise in health care costs and dramatically reducing tax expenditures.

Voters are ready for it. They want the national budget fixed. They said it loud and clear during the election.

Boehner unveils his own plan to aid economy