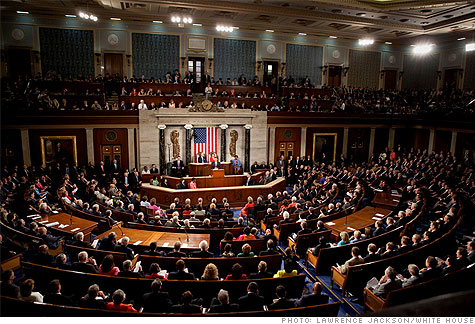 The Republicans are poised to ride an anti-spending wave to more clout in Congress -- and will face the same hurdles as Democrats. By Jeanne Sahadi, senior writerOctober 31, 2010: 8:15 PM ET

NEW YORK (CNNMoney.com) -- Republicans might wake up Wednesday morning in control of one -- or maybe even both -- chambers of Congress. And they will finally have the platform they've wanted to revive the economy and reduce the country's burgeoning debt.

They also may have a very new set of colleagues. The Tea Party has been catapulted to the fore this year amidst an anti-spending, anti-tax fervor.

So it's out with the old, in with the new.

Except for one thing: Making big strides on taxes, spending and debt will be just as hard, if not harder, for the next Congress as it has been for the current one.

The potential for gridlock is great. There may be divisions between the old guard and newer, more ideological members. Achieving consensus also becomes harder if the Republicans take the House while the Democrats hold on to the Senate.

And should Republicans sweep both chambers, there's the prospect of standoffs between legislators and President Obama's veto pen.

William Galston, a senior fellow at the Brookings Institution who worked in the Clinton administration, expects months of confrontation for the next Congress.

"The question is how long that phase will last," Galston said. "At some point the American people will ask for more than two years of their elected officials yelling at each other."

Or, as Alison Fraser, director of an economic policy institute at the Heritage Foundation, put it: "The pressure to do something is going to be unique."

The new Congress may inherit some unfinished tax business from the old Congress.

The Bush tax cuts, for instance, expire Dec. 31. The thinking is that lawmakers are most likely to opt for a one-year extension (two at the most) for the vast majority of Americans.

But there's a chance the issue won't be resolved until the new Congress takes over in January and makes the extension retroactive to Jan. 1.

In any case, a temporary extension means the next Congress will have to revisit the issue. And any push to make the Bush tax cuts permanent -- at a cost of $3.7 trillion over 10 years -- will undercut serious deficit reduction efforts, Galston said. "There's tension built into the heart of the conservative agenda."

Another potential leftover: A temporary fix to prevent the middle class from getting hit by the "alternative minimum tax." So far there isn't one for 2010. If Congress fails to pass one, tens of millions of taxpayers will be hit with a bigger bill.

Regardless of which Congress passes the extensions, temporary tax measures point up a much bigger issue the next Congress will face: The need to overhaul the whole tax system.

On tax reform, there's the prospect for some bipartisanship. Galston believes momentum is building quietly on both sides of the aisle to lower tax rates while at the same time reducing the number of tax breaks and otherwise expanding the amount of income subject to tax.

The GOP's Pledge to America promises that Republicans will hold total spending to 2008 levels, and Republicans have promised to cut roughly $100 billion next year alone. But the pledge doesn't specify how those goals would be achieved.

And the "how" is the toughest part. To say nothing of timing. Even some fiscal hawks worry that steep spending cuts before the economy recovers could be harmful.

Another reason spending cuts will be tough: Any changes to Medicare, Medicaid and Social Security, which make up two-thirds of the budget, are likely to be phased in gradually. So they won't yield significant savings this decade.

That leaves the other third of the budget -- the $1.4 trillion allocated for defense and other domestic efforts such as education and infrastructure.

But making cuts to defense will be controversial, to say the least.

If cuts don't come from defense spending, that leaves about $666 billion spent on other domestic programs. Shaving off $100 billion in one year represents a 15% cut.

Galston isn't convinced such a deep cut will fly. "The new tranche of conservative insurgents will discover that people's appetite for limited government remains ... limited," he wrote in a recent article.

The push to cut spending, of course, is directly tied to the push to start reducing U.S. debt.

On the one side is a conservative answer: steep, immediate spending cuts -- except in defense -- in conjunction with longer term changes to the entitlement programs.

Fraser said her biggest concern is that investors and businesses will lose confidence in the United States' ability to manage its fiscal affairs.

But like a lot of conservatives, she believes that burgeoning U.S. debt levels are the result of too much spending and not too little tax revenue.

Many progressives feel exactly the opposite -- that Uncle Sam needs more revenue and shouldn't be making cuts to government programs, except perhaps to defense.

So that is just one of the seemingly intractable divides that will make it difficult for the next Congress to build consensus over how to shrink U.S. debt.

And the onus will be on them to do so since it's highly unlikely that the lame-duck Congress convening after the mid-term election will vote on any recommendations the president's bipartisan fiscal commission may make on Dec. 1.