'Nothing on the horizon that could upset the market' 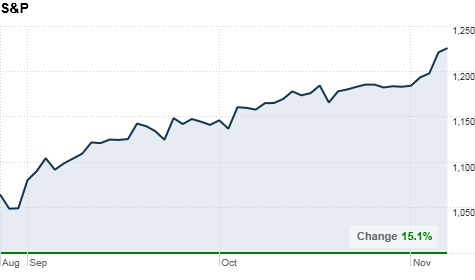 For weeks, stocks have been on the rise as investors placed their bets on improving profits, a Republican victory, the Fed's plan to pump billions into the economy and pick up in the job market.

All of those events have played out favorably for the market, with all the major indexes logging double-digit gains since the end of August: the Dow has climbed almost 13%, the S&P is up 15%, and the Nasdaq has jumped almost 20%.

And though the week ahead is light on economic and corporate news, experts say the momentum in stocks is likely to continue.

"The wind is at our backs in terms of the economy, and all the building blocks are set for stocks to move higher," said Timothy Ghirskey, chief investment officer at Solaris Asset Management. "Equities seem to be the asset class of choice, given the low yields on bonds, and the Fed is also encouraging more money into the stock market."

Though there might be modest pullbacks or flat days for the market as investor reap profits, Ghirskey expects stocks to continue rising through the end of the year.

"As long as we're not hit with a surprise on the Bush tax cuts issue, there's nothing really on the horizon that could upset the market," he said. "The electorate made it pretty clear that it wants to see the Bush tax cuts extended, and it seems like that could be the outcome, which would be favorable for stocks."

Following the midterm election last week, President Obama said that he is willing to negotiate to ensure the Bush tax cuts are extended for the middle class by Jan. 1.

Monday: There are no market-moving economic or corporate events expected on Monday.

Tuesday: The Commerce Department releases the wholesale inventories report in the morning. Inventories are expected to have risen 0.6% in September after jumping 0.8% in August.

Wednesday: The Department of Labor releases the weekly jobless claims report in the morning. The number of Americans filing new claims for unemployment last week is forecast to fall to 450,000 from 457,000 in the previous week, according to a consensus of economists surveyed by Briefing.com.

Continuing claims -- a measure of Americans who have been receiving benefits for a week or more -- are expected to have edged up to 4.35 million from 4.34 million in the previous week.

The trade balance, due in the morning from the Commerce Department, is expected to have narrowed to $45.0 billion in September from $46.3 billion in August.

Reports on import and export prices, and weekly crude oil inventories are also due in the morning. The October Treasury budget is on tap for the afternoon.

Macy's (M, Fortune 500) is due to report results before the start of trading. The retailer is expected to have earned 4 cents per share versus a loss of 3 cents per share a year earlier, according to analysts polled by Thomson Reuters.

Thursday: Leaders of the world's major economies, including President Obama, convene for a two-day summit in Seoul, South Korea. They are expected to discuss recent currency tensions as well as other global economic challenges and regulations.

Before the market opens, media conglomerate Viacom is expected to report earnings of 69 cents per share, flat compared to the same period a year ago.

Earnings from rival Walt Disney Co., which are due after the closing bell, are also forecast to stay flat at 46 cents per share.

Treasury bond markets, government offices and some banks are closed for Veterans Day, but all other financial markets are open.

Friday: Before the market opens, J.C. Penney and Wendy's/Arby's Group will report financial results. The retailer's earnings are expected to increase, while analysts expect the fast food chain to show a loss for the quarter.

The University of Michigan's consumer sentiment index for November, due later in the morning, is expected to have risen to 69.0 from 67.7 in the previous month.