Stocks: Will the slide continue? 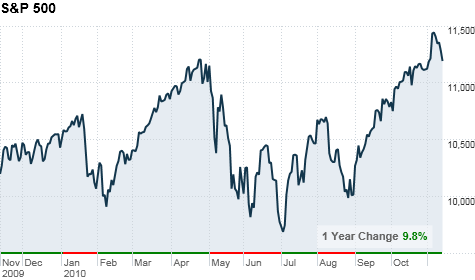 NEW YORK (CNNMoney.com) -- Stocks closed out their worst week in three months on Friday, but it's a new week on Wall Street and investors are bracing for a slew of economic and corporate news to help set the tone.

With Black Friday less than two weeks away, all eyes will be on the retail sector. The government's monthly retail sales report kicks things off before the opening bell Monday morning, but investors will be more focused on financial results and guidance from major retailers for the period that includes the all-important holiday season.

"Hearing from the retailers will give us insight as to what's happening in the minds of American consumers, and how much they're willing to spend this holiday season," said Kim Caughey, senior equity analyst at Fort Pitt Capital Group. "We saw a surprise pickup in hiring in the last jobs report, so that should make for happy consumers and happy holidays."

Caughey said investors will also be paying close attention to how retailers are coping with higher cotton prices, which have surged in recent weeks as the dollar weakened.

Monetary and fiscal policy may also take the stage this week, as President Obama returns from the G-20 meeting of global leaders and Congress reconvenes for the start of its lame-duck session. Lawmakers are expected to begin discussing the proposal to cut the deficit by $4 trillion over the next decade as well as the Bush tax cuts, which are set to expire at the end of the year.

Investors will be on the lookout for news relating to Europe's sovereign debt crisis. The same fears that weighed on markets last spring resurfaced last week, this time sparked by Ireland's fiscal instability.

"We'll be watching Europe very closely," said Karl Mills, president and chief investment officer at Jurika Mills & Keifer. "The markets were giving a great amount of importance to the midterm elections and the Fed's new plan, but now the market could face a new bout of sovereign debt concerns."

Monday: Economists expect the Commerce Department to report that retail sales rose 0.7% in October, after a 0.6% rise the previous month, according to consensus estimates gathered by Briefing.com. Sales excluding volatile autos are expected to have ticked up 0.3%.

The Empire Manufacturing survey is also due before the start of trading. The regional reading on manufacturing is forecast to have slipped to 11.7 in November from 15.73 in October.

The September reading on business inventories, due from the government later in the morning, is likely to show an increase of 0.9%.

Tuesday: The Producer Price Index, a measure of wholesale inflation, is due out from the Commerce Department before the opening bell. The index is expected to have edged up 0.8% in October after rising 0.4% in September. The so-called core PPI, which strips out volatile food and energy prices, is expected to have risen 0.1% after increasing by the same amount in the previous month.

Government data on industrial production and capacity utilization for October are also due before the market opens.

Wal-Mart Stores (WMT, Fortune 500) reports results before the start of trading. The Dow component is expected to have earned 90 cents per share, up from 84 cents a year ago, according to forecasts from analysts polled by Thomson Reuters.

After the opening bell, the National Association of Homebuilders is scheduled to release its housing market index for October. The figure is expected to edge down to 15.0 from 16.0 in September.

Also before the bell, discount retailer Target (TGT, Fortune 500) is forecast to have booked earnings of 68 cents per share, up from 58 cents a year ago.

After the market closes, analysts are looking for Applied Materials (AMAT, Fortune 500) to reports earnings of 31 cents per share, compared to 11 cents a year ago.

Thursday: The Department of Labor releases the weekly jobless claims report in the morning. The number of Americans filing new claims for unemployment last week is forecast to inch higher to 442,000 from 435,000 in the previous week.

Continuing claims -- a measure of Americans who have been receiving benefits for a week or more -- is expected to hold steady at around 4.30 million, the same as in the previous week.

The Philadelphia Fed index, another regional reading on manufacturing, is expected to have improved to 4.5 in November from 1.0 in October.

The index of leading economic indicators is expected to have risen 0.6% in October after rising 0.3% the previous month.

Friday: There are no market-moving economic or corporate events expected on Friday.

Blowing up the tax code