In nuclear energy, smaller is better 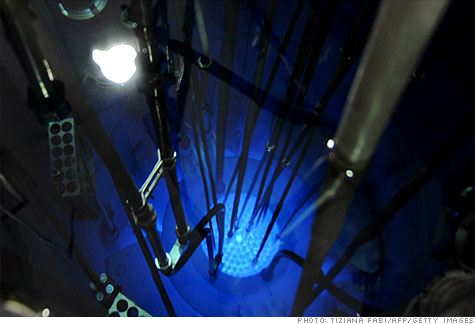 FORTUNE -- When electricity giant Constellation Energy decided last month to pull out of its ambitious Calvert Cliffs nuclear-plant project, the move tossed a giant wet blanket on the so-called "nuclear renaissance" that has fueled hope, and hype, for a resurgent nuclear-power industry in this country.

That Constellation (CEG, Fortune 500), a giant energy generator working with French mega-utility Electricité de France in negotiating a $7.5 billion loan guarantee from the Department of Energy, couldn't get a big new reactor built at an existing nuke plant is a clear indicator that the nuclear renaissance has been, so far, more heat than steam.

In the last three years, 13 power companies have submitted applications to the Nuclear Regulatory Commission for new nuclear stations, or additions to existing ones, totaling 22 new reactors. So far, not one has been licensed and only one -- Southern Company's (SO, Fortune 500) Vogtle plant in Georgia -- has gotten a DOE loan guarantee. While the DOE, under both presidents Bush and Obama, has expressed its support for new nuclear plants, the industry contends that the agency is demanding terms -- in the form of fees for multi-billion-dollar loan guarantees -- that make new plants infeasible.

But there's another plausible message for the industry in the 86-ing of the much-ballyhooed Calvert Cliffs scheme: "Think Small."

A growing cadre of scientists and executives is promoting the idea of small, modular reactors (SMRs) as the way out of the current impasse. And the nuclear industry's biggest players are signing up.

Earlier this month, GE Hitachi Nuclear Energy signed a memorandum of understanding with Savannah River Nuclear Solutions -- itself a triple partnership between Fluor-Daniel (FLR, Fortune 500), Northrop Grumman (NOC, Fortune 500) and Honeywell (HON, Fortune 500) -- to build a prototype SMR at the DOE's Savannah River Site. Earlier this year, Bechtel, a company not exactly renowned for miniaturization, said it will team with nuclear vendor Babcock & Wilcox (BWC) to bring a small, commercial reactor to market. Westinghouse is also developing an SMR design, called the IRIS (International Reactor Innovative & Secure). Meanwhile, Seattle-based TerraPower -- a secretive startup funded by Intellectual Ventures, the bleeding-edge technology investment firm headed by former Microsoft exec Nathan Myrvhold and partially backed by Bill Gates -- is moving ahead with an SMR design that could, in theory, run for decades on spent nuclear fuel.

By definition, SMRs defy the old saw, often attributed to Al Gore, that "Nuclear plants come in only one size: extra-large." The new unit at Calvert Cliffs would produce just over 1700 megawatts of power; the GE Hitachi PRISM reactor to be built at Savannah River would be 299 MW, just under the limit for an officially "small" reactor. Future versions that could fit into a shipping container are envisioned at 60 or even 30 MW. Like mobile homes, SMRs can be manufactured centrally and assembled onsite, easing financing and shortening timeframes to electricity production; in theory, multiple SMRs could be combined to create a large generating station.

What's more, SMRs could produce energy at a lower price-per-kilowatt than conventional nuclear plants, making them a viable alternative to low-cost natural gas production. Lower costs per reactor and per kilowatt should, in theory, make the plants more economical -- and more attractive to both federal regulators and investors.

"It's a smaller, more affordable nuclear system," says Tom Sanders, president emeritus of the American Nuclear Society, who will be heading up the nuclear research program at Savannah River. The industry, he adds, has realized that "You don't always need to add 1500 megawatts at a time."

More compact and more affordable are good things; even better is the prospect that SMRs could help solve the problem that continues to loom over the future of nuclear power: nuclear waste storage and disposal.

The PRISM project (PRISM stands for "Power Reactor Innovative Small Module") is a sodium-cooled fast-reactor design that uses liquid sodium, rather than water, to transfer heat from the core, and which emits neutrons at very high energies, rather than the comparatively "slow" levels of conventional light-water reactors. For reasons of fundamental physics, slow neutrons tend to collide more frequently with other atoms than fast ones -- the probability of a fast neutron colliding with (and splitting) another atom are akin to those of you or me hitting a 95-mph major league fastball, as Dr. Eric Loewen, who heads the PRISM program at GE Hitachi, puts it.

"Sodium cooling allows the neutrons to be higher energy," Loewen explains, "and at higher energies you can drive different nuclear reactions," including burning up spent nuclear fuel from conventional reactors. For a variety of physics and engineering reasons, sodium-cooled designs work best in smaller sizes.

That means that PRISM has the potential to consume both plutonium from decommissioned weapons and spent nuclear fuel, as well as reduce the emission of greenhouse gases -- the three pressing goals facing Energy Secretary Stephen Chu. Sanders believes that water-cooled SMRs could be built at Savannah River in the next few years; sodium-cooled versions, like PRISM, should follow soon thereafter.

But this may not be such a quick fix. It could take a decade or more to bring these designs into commercial production. The three main barriers to widespread deployment, according to Philip Moor, who heads up a special ANS committee examining the business and manufacturing issues around SMRs, are the same that face any new nuclear plant: "Dirt, licensing and money."

Savannah River will supply the dirt (the real estate and infrastructure), and industry heavyweights like GE (GE, Fortune 500), Westinghouse and Bechtel are lining up to provide the money, at least for demonstration projects. That leaves licensing.

"Once we start the demonstration projects, we can start pursuing the license application," remarks Sanders. But, "we need something operating on the ground."

That's hardly a slam dunk. It's worth noting that the SMR is not a new concept. GE actually started the PRISM program back in 1981, and in 1994 the NRC issued a report that said the commissioners foresaw no impediments to licensing. The project was abandoned in 2001, before Loewen was hired in 2006 to jump-start it.

Now, says Loewen, changing public attitudes toward nuclear power as a carbon-free energy source, and the impasse over the Yucca Mountain waste-storage facility in Nevada, have given new impetus to the SMR concept, and to the PRISM program.

As long as natural gas sells for record low prices, though, any new nuclear plants will continue to look expensive; and investors looking back at 30 years of nuclear dead ends are sure to be wary of new technological marvels, however promising. The history of nuclear power demonstrates that nothing is truly viable until the core goes hot.

Nevertheless, short of radical new proposals like getting rid of uranium altogether in favor of thorium power, SMRs offer the best way forward for new nuclear power -- and a potential solution for global warming. Smaller is beautiful, and in this case it could be more profitable as well.