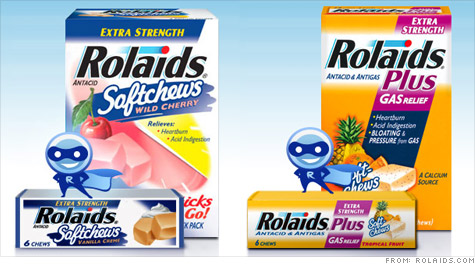 This is the latest in a string of recalls this year by McNeil of other non-prescription drugs including Tylenol, Motrin, and Benadryl.

McNeil spokesman Marc Boston said the Rolaids recalls involve products that were made for McNeil by a third-party manufacturer.

The company said it has suspended production of the recalled medicines while it investigates the matter and subsequently implements corrective actions.

The Johnson & Johnson (JNJ, Fortune 500) unit said its investigation has determined that the materials were potentially introduced into the product during the manufacturing process.

McNeil said that while the risk of serious adverse health consequences is remote, it is advising consumers who have purchased these recalled products to discontinue use.

Consumers who purchased the recalled products should contact McNeil Consumer Healthcare, either at http://www.rolaids.com/ or by calling 1-888-222-6036 about receiving a refund.

The company said consumers who have medical concerns or questions should contact their health care provider.