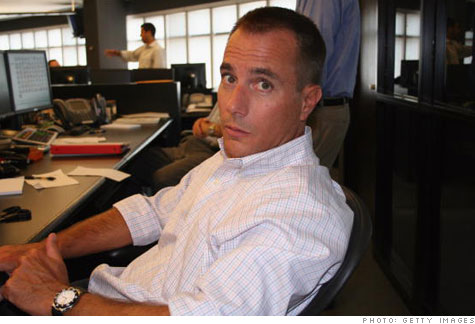 NEW YORK (CNN) -- Mark Madoff, the son of convicted Ponzi-schemer Bernard Madoff, apparently killed himself while his wife was out of town and his 2-year-old son was asleep in a nearby bedroom, New York police officials said Saturday.

Madoff was fully clothed and hanging from a ceiling pipe with a dog leash around his neck. The boy was unharmed.

Prior to his death, Madoff e-mailed his wife in Florida with "words to the effect that someone should check on his son," Browne said.

Neither Browne nor Police Commissioner Raymond Kelly would say if Madoff had left a suicide note.

But Kelly said that Madoff sent multiple e-mails to various family members "during the morning hours" on Saturday. The e-mails went out after after 4 a.m. ET Saturday, Browne said.

Police investigators were at Madoff's apartment to examine the circumstances surrounding his suspected suicide. His body was taken from the scene around 12:20 p.m. ET, about five hours after he was discovered. Crime scene investigators remained on the scene Saturday afternoon.

A medical examiner will conduct an autopsy to determine the exact cause of death.

Madoff's death occurred on the second anniversary of his father's arrest.

"Mark Madoff took his own life today," Madoff's attorney, Martin Flumenbaum, said in a statement. "This is a terrible and unnecessary tragedy. Mark was an innocent victim of his father's monstrous crime who succumbed to two years of unrelenting pressure from false accusations and innuendo."

In 2009, Bernard Madoff was sentenced to 150 years in prison after pleading guilty to swindling more than $50 billion from investors.

His crimes included masquerading his investment firm as legitimate when it was nothing more than a front. He used funds from new investors to send payments to his more mature investors, falsely portraying them as proceeds from investments, when they were actually stolen money.

The 71-year-old is now at the Butner Federal Correction Complex, a medium-security prison in North Carolina, and scheduled to be released on Nov. 14, 2139.

Bernard Madoff's criminal activities have spawned a tidal wave of civil actions against Mark Madoff, his mother, siblings and hundreds of other defendants, accused of profiting off the Ponzi scheme by withdrawing more money from Madoff's fund than they invested, money they presumably thought was investment income.

A person familiar with the Madoffs says Mark Madoff has not been in touch with his extended family for the past two years.

Irving Picard, the court-appointed trustee in charge of recovering and distributing Madoff's assets, has filed a slew of lawsuits in U.S. Bankruptcy Court in Manhattan over the past week against some of Madoff's victims.

One filed on Dec. 8 named Mark Madoff -- as well as his brother Andrew and uncle Peter -- as one of several defendants in a civil lawsuit.

On Saturday, Picard issued a brief statement expressing his condolences. "This is a tragic development, and my sympathy goes out to Mark Madoff's family," he said.

The defendants include JPMorgan Chase (JPM, Fortune 500), HSBC (HBC), UBS (UBS), an Austrian banker, and two CPAs (and their families) who are accused of knowing about the fraud but covering it up and profiting from it.

The majority of Madoff's victims did not invest directly in his firm.

They invested in third-party feeder funds, and therefore don't qualify for the financial protections extended to direct investors.

So far, 16,394 claims have been filed by investors who claim to have lost money. The majority of the claims -- 13,054, or nearly 80% of the total -- have been denied, because the investors were invested through feeder funds.