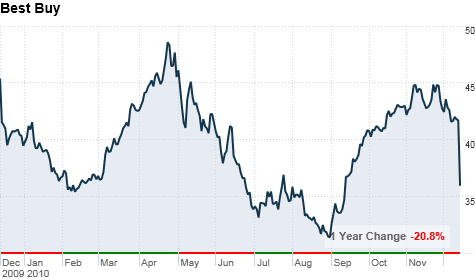 Best Buy reported that revenue totaled $11.89 billion in the third quarter, which ended on Nov. 27. That's a decline from $12 billion during the same quarter a year ago. It also fell short of expectations from analysts, who had forecast $12.45 billion, according to a consensus from Thomson Reuters.

Best Buy's dismal performance was in spite of an overall nationwide rise in retail sales. The Commerce Department reported on Tuesday that retail sales rose 0.8% in November.

As a result, he said the retailer was unable to take advantage of a "shift towards online sales in consumer electronics."

Best Buy also reported diluted earnings per share of 54 cents for the third quarter. That's an increase of one cent from the same quarter last year. But it was significantly lower than analysts' estimates of 61 cents per share.

Best Buy said that its same-store sales dropped 3.3% for the quarter, compared to a gain of 1.7% in the year-ago quarter.