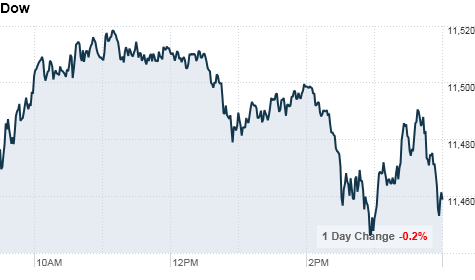 NEW YORK (CNNMoney.com) -- December has been a good month for U.S. stocks, so this week's lackluster action isn't upsetting investors much. Stocks have managed to eke out gains over the past few sessions and are up 5% for the month.

Unless there's some major news to drive investors to the sidelines, it looks like all three major indexes will see double-digit percentage gains for the year. In Wednesday's session, investors weighed worries about a possible Spain downgrade with relatively upbeat U.S. inflation data.

"If news like [Spain] had been a surprise, we'd have seen the Dow off by 1% or so," said Paul Radeke, vice president at KDV Wealth Management. "But everyone knows [Spain] was having trouble with their debt markets. People are looking to the domestic data."

Investors are also looking for Congress to extend the Bush-era tax cuts. The Senate approved the controversial $858 billion tax package Wednesday, despite a series of objections from both the left and the right. The measure, which passed 81-19, now advances to the House of Representatives.

Economy: Investors were focusing on the main U.S. inflation gauge. The consumer price index ticked up slightly in November, and right now investors see "a little bit of inflation as better than any deflation," Radeke said.

"Investors are hoping this goodwill carries into 2011," he said. "But no one knows what's going to happen over the next two weeks."

A monthly survey of manufacturers in New York State from the Federal Reserve Bank of New York showed that conditions improved in December.

World markets: Moody's said it might downgrade Spain's local and foreign currency government bond ratings, citing high refinancing needs in 2011 among other issues. That sent the IBEX, Spain's main stock index, down about 1.4%.

Boston Beer (SAM), the brewer of Sam Adams and other beers, raised its earnings forecast for the remainder of this year and into 2011. Shares surged 12%.

Oil for January delivery gained 34 cents to settle at $88.62 a barrel.

Bonds: The price on the benchmark 10-year U.S. Treasury ticked lower, pushing the yield up to 3.52%.

The 20 CEOs coming to Washington