Obama: Get corporate cash 'off the sidelines' 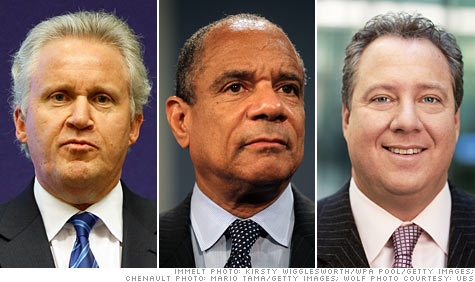 NEW YORK (CNNMoney.com) -- President Obama met with 20 prominent CEOs Wednesday, saying the session focused on jobs and how to get companies to pump the billions of dollars they're holding into the economy.

"We focused on jobs and investment, and they [the CEOs] feel optimistic that, by working together, we can get some of that cash off the sidelines," Obama said as he walked back to the White House from the meeting.

The private discussion between the president and the leaders lasted several hours, with the White House saying issues such as trade, regulation, education and investment were covered.

Obama concluded the session "by asking the attendees to continue the dialogue with him on a shared agenda focused on moving our economy forward," the White House said in a statement.

The so-called CEO summit came at a time when corporate America is sitting on $1 trillion in cash reserves while unemployment remains stubbornly high.

The heads of some of the biggest holders of corporate cash attended the meeting. Cisco Systems has the nation's largest corporate cash reserve with a balance of $39.9 billion, according to Moody's Investors Service.

Four other companies with CEOs attending are among the top 20 in cash on hand. Google is holding $30.1 billion, followed by Intel with $18.3 billion, General Electric with $12.9 billion and Boeing with $8.7 billion.

If companies were to start using that cash to increase the pace of hiring, the unemployment rate might decline.

Before the meeting, Obama said his goal was to find ways to "help us climb out of recession." He also planned to focus on tax reform, a "balanced approach to regulation" and spurring foreign businesses to invest in America, he said.

He said the "primary engine of America's success" is not government, but "the ingenuity of America's entrepreneurs."

Andrew Liveris, CEO of Dow Chemical, praised the Obama administration in an interview with Fortune managing editor Andy Serwer conducted before the summit, saying administration officials had pulled the country back from the brink of financial disaster, and are "becoming really good listeners."

Liveris said the White House meeting will allow the parties to "roll up our sleeves and get to work, and find... the middle ground that the country so desperately needs."

Motorola CEO Greg Brown characterized the meeting as "constructive" and "substantive," and dubbed Obama the "salesman-in-chief" for his efforts to promote American business interests during a recent trip to India.

"The president was clear that he will help, he will assist, he will engage, he will lead ... and you can't ask for more than that," Brown said.

The meeting was a highly visible example of the commitment Obama has made in recent weeks to improve relations with the business community, which has been critical of the administration in its first two years.

Who made the trip?

The CEOs came from a wide range of industries, and the list included a few surprises.

After hosting bank executives last year at the White House, Robert Wolf of UBS (UBS) was the only bank executive to make the cut.

What Americans lost in the recession

Obama wants a do-over with business