Stocks end at highest levels in more than two years 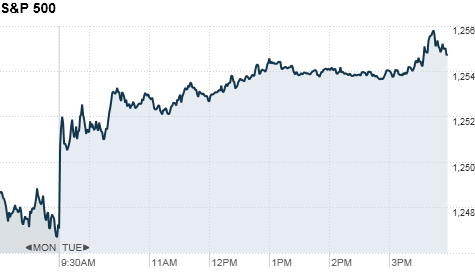 NEW YORK (CNNMoney.com) -- U.S. stocks rose modestly Tuesday but managed to close at their highest levels in more than two years as investors set their sights on 2011.

Stocks are up about 5% this month, with the S&P 500 and the Nasdaq posting gains for 13 of the month's 15 trading session so far. All three major indexes are poised for double-digit gains for the year.

But as investors close out their books leading up to the holidays, the rest of the year is likely to be pretty quiet.

"Trading volume is fairly light, and it's not uncommon to see the market continue on the trajectory it has been on during the month of December," said Robert Siewert, portfolio manager at Glenmede.

"Looking out into 2011, the economy remains pointed in the right direction," Siewert said. "As long as the economic conditions continue to improve, the stock market should continue to benefit."

On Monday, stocks ended mixed after waffling between gains and losses. The three major indexes have risen to two-year highs during the last few weeks, since President Obama announced the compromise deal on the Bush-era tax rates. Last Friday, the president signed a tax-cut plan into law.

Also in Asia, the Bank of Japan held its key interest rate unchanged between zero and 0.1%. And China's vice premier said China has supported the European Union with its debt crisis, also according to government-owned news agency Xinhua.

Moody's Investors Service put Portugal's government bond ratings on review for a possible downgrade. Moody's cited "uncertainties about Portugal's longer-term economic vitality;" "concerns about Portugal's ability to access the capital markets at a sustainable price," and concerns about whether the government will be able to support the banking sector, "which may be needed for the banks to regain access to the private capital markets" as reasons for the downgrade watch, according to a statement from the company.

Companies: Toyota Motor Corp. (TM) -- the Japanese automaker that suffered a series of high-profile recalls -- will pay $32.4 million in civil penalties, the U.S. Department of Transportation said Monday. The penalty is the maximum allowed by law. Toyota's stock rose 1%.

After the closing bell, Nike (NKE, Fortune 500) said its profit rose 22% to $457 million, or 94 cents per share, on revenue of $4.8 billion. Analysts were expecting the sporting giant to report earnings per share of 88 cents. Shares rose 0.3% after hours.

Economy: The Census Bureau reported Tuesday that the population of the United States grew 9.7%, to 308.7 million people over the past decade -- the slowest rate of growth since the Great Depression.

Nevada was the fastest growing state over the decade, followed by Arizona and Utah. Michigan was the big loser -- with Rhode Island, Ohio and Louisiana also lagging badly.

Currencies and commodities: The dollar rose against the euro, the British pound and the Japanese yen.

Oil for February delivery added 45 cents to settle at $89.82 a barrel.

Bonds: The price on the benchmark 10-year U.S. Treasury ticked down, pushing the yield up to 3.31%.