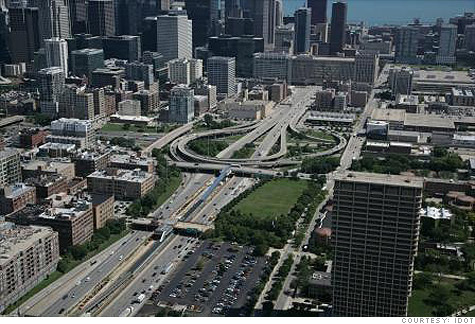 The Eisenhower Expressway will get an upgrade thanks to the Build America Bonds program. By Tami Luhby, senior writerDecember 22, 2010: 4:33 PM ET

NEW YORK (CNNMoney.com) -- States and localities are about to kiss a vital source of funds goodbye.

The Build America Bonds program, a hugely popular Recovery Act initiative that allowed many state and municipal agencies to support infrastructure projects, is coming to an end on Dec. 31.

State and local officials had hoped Congress would extend the program by a year or two, but federal lawmakers have not been feeling very generous to states recently. They did not include the bonds in the $858 billion tax-deal, as some had hoped.

Nearly $180 billion in debt has been issued under the program since its inception in April 2009, according to Thomson Reuters. Build America Bonds account for more than a quarter of this year's municipal bond issuance, helping boost the sector to a record level.

The Obama administration created the program last year to help state and local agencies regain access to the bond markets after the financial crisis made it tough for them to borrow. These agencies depend on issuing tax-exempt debt to finance capital projects, but investors were demanding high interest rates amid the global financial meltdown.

Under the Build America Bonds program, the agencies issue taxable bonds with the federal government subsidizing 35% of the interest payments.

The money has been used to rebuild highways, shore up bridges, upgrade rail systems and put up college dormitories.

"In some cases, it allowed them to go ahead with vital infrastructure projects that they needed," said Daniel Berger, senior market strategist at Thomson Reuters Municipal Market Data. "This has given them access to capital to fund these projects."

States and municipalities don't usually dabble in the taxable bond market. The Build America Bond program allowed them to tap into to a larger pool of investors, such as foreign buyers who aren't interested in tax-exempt debt because they wouldn't reap any advantages.

And the popularity of the bonds allowed the public agencies to lock in lower rates for the long-term debt, which saved them a bundle.

Agencies within California were the top issuers of Build America Bonds, with $38.4 billion in offerings, according to Thomson Reuters.

The state alone issued about $14 billion, according to the Treasurer's Office. It saved well over $1 billion over the life of the bonds. The projects also provided tens of thousands of people with jobs, both in the construction industry and in support roles.

"That's a good chunk of change, especially for a state that's doing its best to get on an even keel," said Tom Dresslar, spokesman for the treasurer.

The University of California has been a "very active and very thankful" participant in the Build America Bonds program, said Peter Taylor, the university system's chief financial officer. The taxable debt is helping fund a new cancer hospital at the San Francisco campus, a gym at Berkeley and dorms at Merced.

The San Diego campus has restarted two major projects thanks to the program. It is constructing an engineering building with office and lab space for 50 faculty members, who will serve 1,100 students. And it is expanding the Rady School of Management to accommodate more classrooms, study space and faculty offices.

The university system estimates it will save a total of $600 million on the $3 billion of bonds issued. And it was able to charge forward with some projects it would not have started for another year or two.

"All of a sudden, it's a lot more affordable," Taylor said. The program "has allowed us to be a little of ahead of schedule from where we'd be otherwise.

Since they are taxable, the Build America Bonds initiative has also opened up the municipal bond market to a lot of new investors.

Illinois' Director of Capital Markets, John Sinsheimer, traveled to Europe and Asia to market the state's program, which has issued $3.2 billion.

The aggressive interest from overseas buyers allowed the state to reduce its interest rate by about 40 basis points, he said. Overall, Illinois expects to save $325 million.

The state is using the funding to improve schools, bridges, rail systems and to upgrade the Eisenhower Expressway, a major highway that runs into Chicago.

Agency officials say they aren't quite sure what to expect in 2011 when they are forced to rely only on the tax-exempt bond market.

It's unclear whether the traditional investors in government debt will return with sufficient demand to compensate for the expiration of the Recovery Act program, said Erik Kriss, spokesman for the budget division in New York. That may force states and municipalities to offer high interest rates to lure them in.

Agencies nationwide may not turn to the bond market as often next year. The University of California already estimates it will issue only $300 million of debt in 2011, one-tenth what it issued in the 20 months of the Build America Program.

"They won't quite have all the access they had before," said Berger of Thomson Reuters. "They may have to defer some projects."

This could not only slow infrastructure improvements, but could also cost people their jobs. The Build America Bonds program helped spur growth in hiring of heavy and civil construction workers, the only category of builders not to shrink over the past year, according to Ken Simonson, chief economist of the Associated General Contractors of America.

"Build America Bonds unquestionably helped states to do more construction than they would have been able to," he said. "I am worried public construction will take a hit in 2011."