Gifts to Obama: From flashy to bizarre 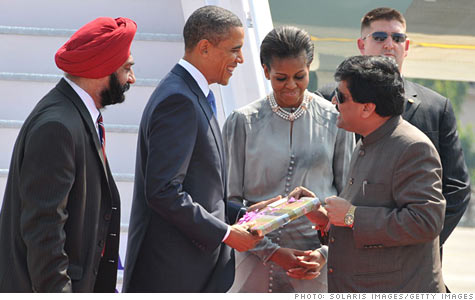 President Obama gets a gift from Ashok Chavan, Chief Minister of the Indian state of Maharashtra in Nov. 2010. By Charles Riley, staff reporterJanuary 19, 2011: 6:24 PM ET

NEW YORK (CNNMoney) -- The State Department has released its annual list of gifts from foreign governments to federal employees, and as one would expect, President Obama made out pretty well.

In total, the president racked up 54 gifts with an estimated value of more than $160,000 during 2009, the most recent tally that the government furnishes.

The gifts range from the practical -- a small wooden CD holder from Russian President Dmitry Medvedev -- to the weirdly extravagant -- a $395.00 pencil from Jose Manuel Durao Barroso, the president of the European Commission.

By law, Obama doesn't keep gifts of significant value. Instead, most items are transferred to the National Archives or the General Services Administration.

But that didn't stop foreign leaders from lavishing gifts on influential government employees.

Saudi King Abdullah captured the prize for biggest spender, gifting Obama a large gold medallion, a large brass and glass clock and a marble base featuring miniature figurines of gold palm trees and camels worth an estimated $34,500.

The generosity of the King didn't stop there, as he also gave first lady Michelle Obama a necklace made of 33 pearls worth $14,200 and a ruby and diamond jewelry set valued at $132,000.

The first children received jewelry worth $7,275 from the King, while senior White House staffers had to settle for a more modest gift pack consisting of silver cufflinks and watches.

While the exchange of gifts is par for the course in the world of high-pressure diplomacy, some are also downright strange.

Topping that category is a gift received by Alfred Almanza, a Food Safety and Inspection service administrator, who received a book entitled "The Gastronomic World of Don Quixote'' from a Spanish government official.

Once the government receives a gift, it is required to list a reason for accepting it. The standard response: "Non-acceptance would cause embarrassment to donor and U.S. Government."

The report also notes that 12 bottles of wine and a bottle of olive oil given to Obama were "handled pursuant to Secret Service policy."

The fate of those gifts remains unclear.

Are prepaid cards right for your kid?