Schmidt to step down as Google CEO 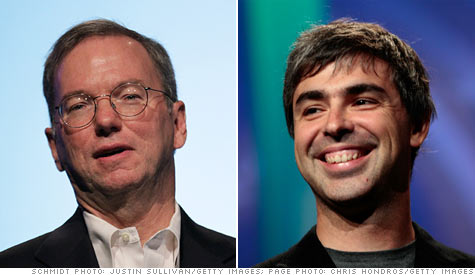 NEW YORK (CNNMoney) -- Eric Schmidt will step down from his role as Google's CEO in April and be replaced by co-founder Larry Page.

Schmidt, who joined Google in 2001 to become its chief executive, will stay on as executive chairman after he leaves his CEO role on April 4. According to the company, he will focus on deals, partnerships, customers and broader business relationships, government outreach and technology thought leadership. He will also continue to act as an advisor to co-founders Larry Page and Sergey Brin.

"We've been talking about how best to simplify our management structure and speed up decision making for a long time," Schmidt said in a prepared statement. "By clarifying our individual roles we'll create clearer responsibility and accountability at the top of the company."

His Twitter comment on the shuffle was less formal: "Day-to-day adult supervision no longer needed!," he wrote.

On a conference call with analysts, Schmidt said he's excited about the change, because the more strategic role will give him "a chance to work on the things I'm most interested in." He expects it to be "a significant improvement in the things that I can do in my time."

The surprise move shocked the tech industry. Schmidt, Page and Brin have long run Google as a trio, an approach they spelled out in an "owner's manual" included in the company's 2004 IPO filing.

"We run Google as a triumvirate," Page and Brin wrote. "The three of us run the company collaboratively with Sergey and me as presidents. The structure is unconventional, but we have worked successfully in this way."

Schmidt said he doesn't anticipate any material change in strategy. "We tend to agree on everything," he noted.

But he said he believes the new management structure will speed up decision making at the company. Google has lost some of its top minds in the past several months, and a common complaint is that good ideas require too many steps to get approved.

Page, Google's founding CEO, served as chief executive from 1998 to 2001. He will once again take charge of the company's day-to-day operations, and he will also be in charge of Google's product development and technology strategy. Brin, Google's other co-founder, will continue to work on Google's new projects, but will no longer serve as a company president.

About Schmidt's tenure, Page said Google's results over the past decade "speak for themselves."

Schmidt returned the compliment, saying Thursday that Page is "ready to lead."

The world's online search leader said its net income in the fourth quarter rose to $2.5 billion, up 29% from a year earlier.

Results included one-time charges of 94 cents per share. Without the charges, Google said it earned $8.75 per share. Analysts polled by Thomson Reuters, who typically exclude one-time items from their estimates, forecasted earnings of $8.10 per share.

Profit rose as both the number of clicks on Google's ads and the amount that advertising partners pay per click increased by a healthy margin: Paid clicks rose 18% and cost per click grew 5% over last year.

"Our strong performance has been driven by a rapidly growing digital economy ... and by the extraordinary momentum of our newer businesses, such as display and mobile," Schmidt said about Google's quarter. "These results give us the optimism and confidence to invest heavily in future growth."

With that rosy outlook, Google added more than 1,000 employees to its staff during the quarter and now employs 24,400 people.