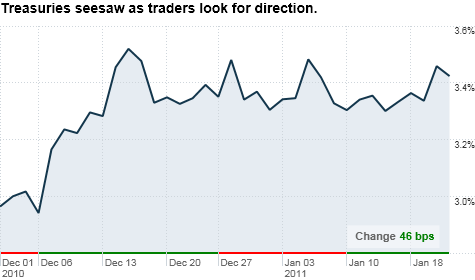 NEW YORK (CNNMoney) -- Treasuries have been seesawing in a tight range since the start of the year, as traders question the pace of the economic recovery.

While things have been looking up, the bond market already priced in signs of improvement at the end of 2010, and traders are now looking for something more to push it one way or the other.

"People are taking a wait-and-see attitude about the degree of intensity of the recovery, with everyone trying to figure out if we're going to have lackluster growth or robust growth," said Bill Larkin, portfolio manager at Cabot Money Management. "The market is basically saying QE2 is going to dissipate mid-year, and housing and employment are two wild cards -- with Europe is in there too."

"Treasuries have been trapped since the beginning of December and that's likely to continue until we get some good news on the employment side," Larkin said. "Once we do, that will help us break into a new range and yields will likely go higher."

Lackluster employment reports over the past couple of months have kept the bond market fairly stable, but Larkin said yields could head higher if a significant improvement emerges.

"We're probably overdue for a good employment report. Every time you look at the data it's going in the right direction but it's just not robust," he said. "I think in the next few months we'll get some good numbers and yields might pop into the 3.6% range on the 10-year yield, but then we'll focus on real estate problems or find something else to worry about."

Other worries that could pressure the market include inflation -- or deflation -- and the nation's debt.

10 ways to play the spike in global inflation

"This year, there are lots of unforeseen risks in the bond market that we need to be careful about," said Larkin. "At some point the debt ceiling will have to become an issue, and there's a tug-of-war between deflation and inflation arguments."

Until traders feel more confident that the recovery is going to continue -- and at a brisk pace -- Treasuries are likely to continue to trade in a narrow range.

Traders will be looking closely at the Federal Reserve's interest rate decision next week for further cues about the health of the economy.

"What's happened is that we've seen all this robust activity at the end of the year but the market acted ahead of it, so we need something more to get things going," said Larkin.

The yield on the benchmark 10-year note edged down to 3.41% from 3.46% late Thursday. Prices and yields move in opposite directions.

Oil, gold and silver cool off

Help Desk
Track testing tires to find the best
Find out how TireRack tests and reviews tires and why choosing the right ones for your car is so important. Play
Markets
Data as of 10:52pm ET
Data as of 2:44pm ET
Sponsored by
Sections