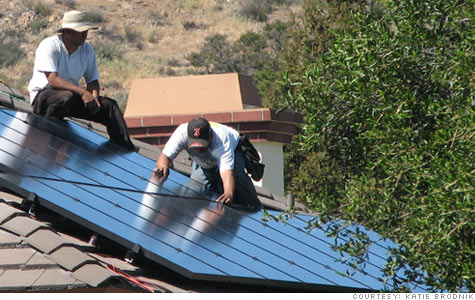 NEW YORK (CNNMoney) -- At a solar power company in downtown San Francisco, Edward Fenster plans on doubling his workforce to 8,000 people in the next year.

Fenster is chief executive of SunRun, a company that puts solar panels on residential rooftops.

Over the last four years, his business has grown from one employee (himself) to 4,000, most of them contractors SunRun hires to do the installations.

Sun Run's growth spurt is in large part due to the subsidies it enjoys from the federal government. Fenster expects his customers to more than double next year.

Generally, tax breaks mean the federal government absorbs about 30% of the costs for a solar project. That's fairly standard across the wind and solar industry. Fenster knows just where his business, and others like it, would be if those subsidies disappeared.

"No solar business would survive," he said. "I can't imagine you'd find much new wind construction either."

In his State of the Union speech Tuesday night, President Obama called for continued funding for renewable power, part of a broader plan to improve the nation's infrastructure. In his prepared remarks, Obama said that investments in clean energy "will strengthen our security, protect our planet, and create countless new jobs for our people."

But with the deficit high on everyone's mind, finding that money will prove challenging.

Obama said Tuesday night that to help pay for alternative energy investments, he is urging Congress "to eliminate the billions in taxpayer dollars we currently give to oil companies."

"I don't know if you've noticed, but they're doing just fine on their own. So instead of subsidizing yesterday's energy, let's invest in tomorrow's," he added.

Still, various subsidies, including tax credits and direct grants, are already in place for companies that produce electricity from wind and solar. They cost the government about $5 billion in 2010. Ethanol subsidies cost another $6 billion.

This doesn't take into account various Department of Energy programs, including research and development grants. The Energy Department did not respond to a request for comment.

The stimulus effort set aside over $100 billion for various clean technology programs to be spent over several years. The funding includes money for solar and wind production, but also cash for R&D, conservation programs and clean water initiatives, according to Sheeraz Haji, head of the research firm the Clean Tech Group.

Only about $25 billion of that has been spent, said Haji, making the remaining $75 billion a tempting target for deficit hawks.

Even the tax credits for wind and solar production are not safe. It's not thought that mainstream politicians from either side of the isle are looking to ax them -- they've been the government's primary means of supporting renewable energy for decades. But there are growing calls for their demise.

"If 30 years isn't enough for the industry to stand on its own feet, you have to ask how long it will be," said William O'Keefe, chief executive of the Marshall Institute, a think tank. "There's just been too much given to alternatives that cannot sustain themselves."

From agriculture to automakers, O'Keefe is against subsidies for any industry.

He's all for funding R&D into new, cheaper renewable technology. He just doesn't want to fund the production of electricity at rates that he says are too high. This is especially true, he says, at a time when renewables account for a small part of our overall energy demand.

According to the Energy Information Administration, renewable energy excluding big hydropower accounted for about 6% of the country's total energy production in September of 2010. The vast majority of that was ethanol and other biofuels; wind and solar accounted for just 1%.

Although the numbers are small, they are over twice what they were in 2006.

Plus, prices are falling fast.

SunRun's Fenster said the price of a watt of electricity from solar power has dropped from $90 in the 1970s to $1.65 today. He said the industry won't need subsidies forever. In five years it can get by on a 10% subsidy, he said, and none shortly thereafter.

And that's the main argument supporters of the subsidies make. Renewable power is growing at a huge clip, and is necessary to protect the environment and to replace dwindling supplies of fossil fuel, especially oil.

The government has every right to be in the renewable business, they say, as the fuel promotes a public good - namely, clean air and energy independence.

Plus, when put in perspective, they say the subsidies aren't that large. The Environmental Law Institute estimates renewable energy received $29 billion in subsidies from 2002 through 2008. Over the same time, the say the fossil fuel industry got $73 billion in subsidies, although a big chunk of that was in the form of a tax credit oil companies can take for paying royalties overseas.

And while the U.S. stimulus may have allocated $100 billion for environmental programs, China's stimulus plan is thought to have set aside $250 to $350 billion, according to Clean Tech's Haji.

"They are totally kicking our butts," said SunRun's Fenster. "As a country, we need to look toward the future."

The most powerful states for solar