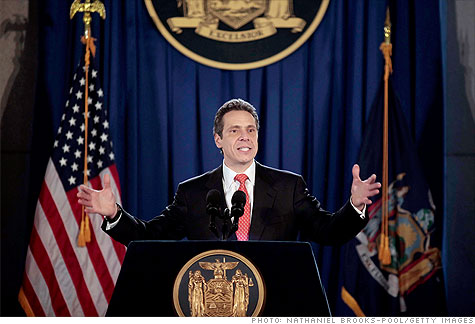 Seeking to close a $10 billion budget deficit, the governor is proposing $8.9 billion in overall spending cuts, while raising $340 million in revenues and $805 million in one-time actions.

In keeping with his campaign pledge, the governor is not calling for a tax increase, instead he is looking to improve collections and enhance the lottery.

Cuomo is proposing reducing school aid by $1.5 billion, or 2.9%, and Medicaid by $982 million, or 2%. A 27-member Medicaid redesign team would offer cost-savings suggestions by March 1.

Education and Medicaid are the largest drivers of state spending. State law uses formulas to set the budgets in those areas, which would have resulted in 13% increases for each in the coming year. Cuomo, a Democrat, made headlines Monday by calling attention to these automatic increases and labeling the budget process "a metaphor of Albany dysfunction."

"New York is at a crossroads, and we must seize this opportunity, make hard choices and set our state on a new path toward prosperity," said Cuomo, calling the state "functionally bankrupt." "We simply cannot afford to keep spending at our current rate."

Without these automatic increases, the budget gap would be only $1 billion, he said.

Just one month into his term, Cuomo is taking a hard line with lawmakers. During his budget address Tuesday, he exhorted legislators to do what's best for New Yorkers and not for the "Albany establishment."

"It can't go on because it's unsustainable," he said, blasting groups ranging from home health care agencies to school superintendents for bloated bureaucracies. "We have to change."

Change, however, has never been easy for state legislators, who are also notorious for passing budgets well after the start of the fiscal year on April 1. And Cuomo can't implement his spending plan until lawmakers approve it, likely with many changes.

Senate Majority Leader Dean Skelos, a Republican, had a generally positive reaction to Cuomo's address, his spokesman said. The GOP agrees with cutting spending and holding the line on taxes.

"By making the tough decisions now, we can reform the way government operates and make New York a place where businesses want to stay, grow and create new private sector jobs," Skelos said.

Democratic leaders in the Assembly are still digesting the budget proposal and plan to start hearings on it next week. Assembly Speaker Sheldon Silver called Cuomo's proposal "a great first step." He said his goal is to try to minimize the pain and cut from administration rather than services, but it will be difficult.

"We just don't have the money. It's as simple as all that," Silver told CNNMoney.

Both lawmakers said they felt the budget could be passed by April 1.

Cuomo is the latest governor to push for harsh spending cuts in the wake of the Great Recession. States and municipalities are still facing reduced tax revenues, forcing them to reduce spending on government-supported programs.

What's worse, states are contending with the end of federal stimulus funding, which propped up state aid for education and Medicaid. Governors are looking to close budget gaps for fiscal 2012 that could total as much as $125 billion, according to some estimates. The new fiscal year starts July 1 in most states.

For New York, the loss of federal Recovery Act funding is blowing a $6 billion hole in the state budget, Cuomo said.

Across the board cuts

Cuomo's plan also calls for eliminating 3,500 prison beds and downsizing youth detention and psychiatric facilities. He also wants to slash higher education funding by 10%, cutting $185.5 million in state aid for the senior colleges of the State University of New York and the City University of New York.

Local aid would fall by 2%, or $32 million, for cities, towns and villages, excluding New York City. The state would also save $302 million by withholding aid to the Big Apple, which was set to start this coming year.

The state also plans to lean heavily on its employee unions, many of which will see their contracts expire when the new fiscal year starts on April 1. If concessions aren't made, Cuomo said as many as 9,800 workers could lose their jobs.

Reducing personnel costs is a major component of Cuomo's plan to cut the cost of state operations by 10% at each agency.

The governor is also looking to merge or consolidate several state agencies, as well as reduce the number of agencies, authorities and commissions by 20% over the longer-term.

Cuomo is also offering schools and local governments bonuses to prod them to become more efficient and to improve performance. He questioned why 279 superintendents make more than $200,000 in salary and benefits, more than the governor earns.

"You don't just sit there and I'll send you a check ... you will actually have to do something for the money," he said.