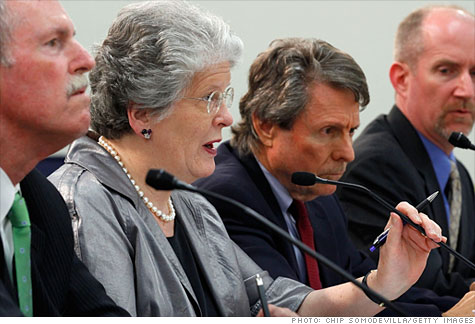 Consumer advocates Clarence Ditlow and Joan Claybrook, both of whom arrived on the public stage during the Carter Administration, wasted no time this week in grabbing microphones to fight the auto industry again.

They said they weren't buying the conclusion of a new report by NASA that relieved electronics from blame for reports of unintended acceleration by Toyota (TM) owners.

Ditlow, head of the Center for Auto Safety, complained that in examining only nine cars, NASA hadn't done enough testing.

He neglected to comment on the difficulty of trying to prove a negative -- as in proving that something didn't happen. Nor did he mention that NASA also analyzed owners' questionnaires for 9,698 vehicles, including 3,054 Toyotas, in attempting to get to the bottom of the sudden acceleration mystery.

As you may recall, NHTSA had previously identified two mechanical defects -- improper floor mats and sticky accelerator pedals -- that might be responsible for cars careering out of control, and Toyota subsequently recalled 8 million vehicles.

But NHTSA wasn't able to answer questions about other incidents in which drivers not only complained that their cars took off unexpectedly, but that they also couldn't be braked to a stop.

So Congress asked NASA to find out if electronic gremlins were to blame. And it found no evidence of a failure in either Toyota's Electronic Throttle Control System or its brake system. That reinforced the longtime suspicions among some that driver error was at fault.

So who are these two safety advocates and why do they still shape the public debate?

Ditlow is a former Nader's Raider who has been with the Nader-founded Center for Auto Safety since 1976. CAS has scored some notable victories, such as the passage of lemon laws in all 50 states and the recall of the Ford (F, Fortune 500) Pinto because of its dangerous fuel tank design. But, like the Pinto, CAS seems to have had its heyday in the 1970s and 1980s, when automakers were less concerned about safety issues.

Like Ditlow, Claybrook is a longtime consumer advocate who ran NHTSA from 1977 to 1981 in between stints at Public Citizen, another Nader group that agitates for corporate accountability and government regulation. It is nothing if not consistent. After President Obama visited the U.S. Chamber of Commerce recently, it complained on its web site "Enough already with the olive branches to Big Business."

Both advocates have long suspected that electronics are to blame for some of the unintended aceleration incidents. In a television interview a year ago, Claybrook said, "I think that every appearance is that it's an electronic issue with the throttle in the vehicle that has the floor mat problem."

In testifying before Congress in March 2010, Ditlow complained that NHTSA and the Department of Transportation were overlooking potential issues with electronic throttle control, computer software, and brake malfunctions.

Nobody is trying to soft-pedal the need for design changes to reduce incidents of unintended acceleraion. NHTSA is considering rules to require cars to have brake override systems and calling for research into the placement and design of accelerator and brake pedals to reduce driver error. Toyota has begun to install brake override systems that cut the throttle when brake and gas pedals are pushed at the same time.

But the media does itself no favors by reflexively seeking out longtime critics in pursuit of a "balanced story," when the statements they provide are so predictable and unhelpful.

And so-called consumer advocates do themselves no favors when they harden their positions on issues rather than exposing themselves to new arguments that might undermine long-held beliefs.

What Toyota learned from Detroit

The rise of the button-down car salesman
Subscribe to Fortune
First Published: February 10, 2011: 11:22 AM ET