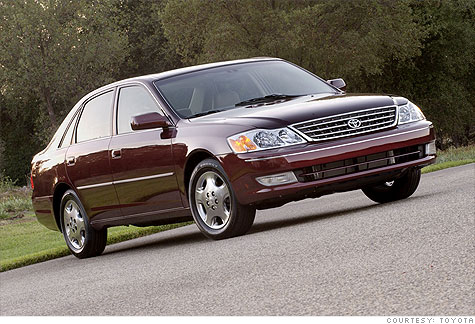 U.S. Transportation Secretary Ray LaHood said, "We enlisted the best and brightest engineers to study Toyota's electronics systems, and the verdict is in. There is no electronic-based cause for unintended high-speed acceleration in Toyotas."

NHTSA enlisted the help of NASA scientists and engineers. The agency said their expertise in areas such as computer controlled electronic systems, electromagnetic interference and software integrity would be a big help.

Despite a string of recalls for other problems, Toyota has long insisted that the electronic controls in its cars are safe.

"We believe this rigorous scientific analysis by some of America's foremost engineers should further reinforce confidence in the safety of Toyota and Lexus vehicles," Toyota's chief quality officer Steve St. Angelo said in a company statement.

Toyota recalled nearly 8 million vehicles in 2008 and 2009 for defects related to gas pedals -- including sticky pedals and floor mat obstruction -- as a result of complaints of unwanted acceleration.

So far, those two problems remain the only known causes of unintended acceleration in Toyota vehicles, NHTSA said.

But NHTSA also mentioned another possible cause: drivers pushing the gas instead of the brakes.

Many drivers may have confused the gas and brake pedals a problem that may account for "the vast majority" of the unintended acceleration incidents the agency investigated, NHTSA deputy administrator Ron Medford said at Tuesday's NHTSA press briefing.

"What mostly happened was pedal misapplication where the driver stepped on the gas instead of the brake or in addition to the brake," Medford said.

"I think this is good news for people who own Toyotas," said David Champion, head of auto testing for Consumer Reports magazine, "They can breathe a sigh of relief."

Toyota has paid $48.8 million in civil fines to settle accusations by NHTSA that the automaker did not respond in a timely manner to report and correct defects for which it ultimately recalled cars.

Some critics of the automaker at the time were not satisfied that those two problems were the only ones to blame for for the growing number of reports that Toyotas were accelerating out of control. They pointed to the electronic throttle control system as another possible culprit.

A common feature in newer vehicles, electronic throttle control uses sensors and computer chips to pass commands between the vehicles' gas pedal and the engine to control a car's speed instead of the simple mechanical connection used in older cars.

While some safety advocates have pointed to an increase in reports of unintended acceleration after Toyota switched to using electronic throttle control, NASA said in its report that it found no such correlation. Reports of sudden acceleration in Toyota cars did spike whenever there was national publicity focused on the issue, however, NASA said.

With the completion of the Toyota investigation, NHTSA said it would begin a broader look at the reliability and safety of electronics systems in modern automobiles.

Congress ordered the DOT to investigate whether there might be a problem with those electronic controls. The study was launched last spring.

As part of the study, the agencies ran tests at a Chrysler Group LLC testing facility in Auburn Hills, Mich. headquarters in which researchers bombarded Toyota vehicles with electromagnetic radiation to see if they could cause any malfunctions that might lead to unintended acceleration.

Toyota Motor Co. has also provided NASA software engineers with "unrestricted access" to the computer code used to control the electronic throttle control systems. The software engineers have been combing through the code looking for anything that might cause a car to accelerate out of control under any circumstances, NHTSA said.

Also, scientists at NASA's Goddard Space Flight Center and NHTSA East Liberty, Ohio, research center have been examining cars and Toyota throttle systems, searching for any defects that might cause unwanted acceleration.

Although Toyota sales have suffered, much of the automaker's sales decline is due to an aging model line-up more than concerns over safety problems, analysts say.

Toyota now includes "brake override" on all its new vehicles. This system automatically cuts engine power as soon as the brake pedal is pressed in order to prevent unwanted acceleration.

NHTSA said that, by the end of this year, it would propose a rule requiring brake override on all new vehicles.

NHTSA also said it plans to propose requirements for standardized operation of push-button keyless ignition systems in cars and to require the installation of Event Data Recorders, devices that record various data including gas pedal and brake usage immediately before and after a major crash.

NHTSA will also research the design and placement of gas and brake pedals in cars to help reduce the possibility of drivers mistakenly pressing the wrong pedal.

Also NASA says that while, in most cars, brake problems result in an unmistakable red dashboard warning light, problems with the gas pedal or throttle result only in a "check engine" light that could indicate any number of other, less urgent problems.

The National Academy of Sciences has its own on-going investigation into the issue of unintended acceleration in all cars across the auto industry. The results of that study are expected later this year.

Toyota is currently facing hundreds of lawsuits over alleged unintended acceleration, most of which have been grouped together in a single California court. Decisions in those cases are not expected for years.

Steve Berman, an attorney leading many of the lawsuits against Toyota, expressed doubts about the report's findings.

"There are too many reports, from too many people," he said in a statement, "to not have a basis in fact."

"There are hundreds of witnesses that say they had this runaway Toyota problem without floor mats and accelerator problems, and they've been ignored," she said.

But expressing his confidence in the safety of Toyota cars, Transportation Secretary LaHood said that he had recently recommended a Toyota vehicle, a Sienna minivan, to his own daughter.

"We feel that Toyota vehicles are safe to drive," he said.