Indiana: An island of calm in state budget storms 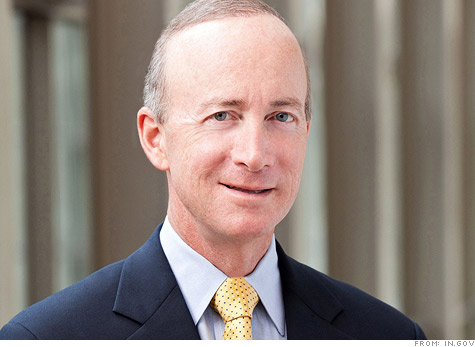 NEW YORK (CNNMoney) -- Not every state that took a body blow from the recession is staring into the abyss of a budget crisis.

While many states scramble to close the widening gap between revenue and spending, Indiana has managed to get its budget deficit under control.

With a gap in the next budget estimated to be just under $300 million -- or roughly 2% of fiscal 2011 -- Indiana's shortfall is far below the overall average of 20% for the 45 states that are facing deficits in 2012, according to the Center on Budget and Policy Priorities.

Indiana largely avoided the housing boom and bust, but it was hit harder than most states by the economic downturn. With its dependence on manufacturing jobs, its unemployment rate has been above the national rate in most months since the financial meltdown.

There's nothing magical about Indiana's ability to avoid the crisis now facing many other states. The secret was making deep cuts in spending early in the process, rather than pushing the problems down the road.

Unlike many other states, Indiana's governor has the power to spend less than the legislature appropriates. Indiana's current governor, Mitch Daniels, exercised that power, and ordered deep cuts in late 2009 when revenue forecasts dropped.

"There's nothing mysterious about it. We've lowered the base of state spending to match the revenue reality," said Daniels.

That included a 20% cut in state government, outside of big-ticket items such as primary and secondary education and Medicaid. State employee headcount outside of education was reduced by roughly 3,000 workers, or about 10% of staff.

The state also made more modest trims in the money sent to local schools and state universities.

In total, the cuts saved $800 million from the amount that had been appropriated less than six months earlier by the Indiana General Assembly.

"Politically, the legislature was insulated from the pain of the cuts and the governor had the power to do it," said John Ketzenberger, president of the Indiana Fiscal Policy Institute, a nonpartisan think tank that studies government finances in the state.

Indiana's current budget is being squeezed by the disappearance of federal stimulus money, which had helped the state avoid being forced to make even deeper cuts over the last two years.

But a rebound in revenue from an improving economy, especially a pickup in the auto industry that still has a major presence in Indiana, is helping.

"We're in better shape than a lot of states," said Larry DeBoer, a Purdue University professor who's an expert on state budgeting, especially Indiana's. "It doesn't mean things aren't tough, but it means we'll get through this thing without any general tax increase."

Daniels and his budgets are getting particular attention now because he is weighing a run for president in 2012. A former head of the Office of Management and Budget in the Bush administration, he believes that other states could learn from Indiana's budget-cutting ways.

"You'd be amazed by how much government you never miss when it goes away," he said.

But Daniels admits that the lessons of Indiana aren't as easy to apply to the federal budget deficit, especially with entitlements and interest payments making up such a large part of federal spending.

"I think there's limited application. I wish I could tell you otherwise," he said.

Making a deep reduction in the federal deficit is crucial to the nation's economic health, he said, but it will be a much tougher process than fixing a hole in the state budget.

"The huge changes we need for the nation to get out of its fiscal ditch are not going to be achieved in this way," he said, referring to his state budgeting process.

"They'll be achieved through a fundamental restructuring of social welfare programs and a look at every major category of the budget, defense included."