The American mall: Back from the dead 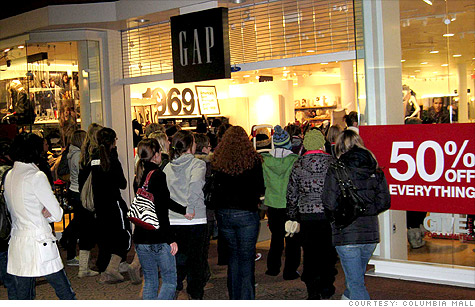 FORTUNE -- It has gotten progressively less cool to meet at the mall since the heyday of the mega shopping center in the 1980s. But starting in the 90s, a downward trend found "anchor" department stores in malls steadily losing their grip on young shoppers, and with them, retail market share. That is, until this year.

The swing hasn't been huge, but it's significant. Department stores anchored to malls actually gained market share over off-mall retailers for the first time since the 1980s. In 2009, the market share of mall-bound department stores had fallen to 2.4%, according to a report by consulting firm Customer Growth Partners. But in 2010, it started to creep up to 2.5%.

"Even though it was only a tenth of a share point, for department stores, that is a huge change," says Craig Johnson, president of Customer Growth Partners. "This is a real turn in the market. We're optimistic that the momentum is just gathering."

It's happening for a couple of reasons. Across the board, consumer spending is picking up since the recession. For decades, consumer spending had been shifting towards off-mall stores. Now, big department stores are doing better, and their success is helping boost the developers who build the malls themselves.So how did they break the cycle?

For one, the retail outlets doing well aren't following the traditional growth strategy of building more and more: "The country is kind of over-malled and over square footed," Johnson says. A couple of other factors are changing to make malls more profitable:

Department stores are making a comeback.

Namely, Macy's (M, Fortune 500) and Nordstrom (JWN, Fortune 500), both anchor department stores for malls, are doing well. Revenue at Macy's was up to $25 billion for 2010, which is up 6.5% from the previous year. Nordstrom, another key department store for malls, increased total retail sales by 12.7% for 2010 compared to 2009. Part of that is due to the success of their outlet stores, Johnson says, but these retailers are also sharpening their anchor-store inventory to capitalize on consumer spending.

Stores that aren't doing well are on the outs.

Department stores like clothing store Mervyns and home décor retail outlet Montgomery Ward used to take up lots of square feet in malls. But post-recession, they have had to consolidate, which has meant that many of them have had to move out of malls. That led to the highest mall vacancy rates in decades during 2008 and 2009, according to the Customer Growth Partners report.

But the exodus had an upside. It cleaned out struggling stores, enabling a fresh cadre of retailers to move in. U.S. retailers including Aeropostale, Forever 21, Love Culture and Vera Bradley started leasing anchor-store sized space in malls as the failing department stores vacated them. So did foreign companies including H&M, Pandora and Sephora. The influx of newer stores keeps malls fresh for consumers, and appears to be keeping them coming back.

More and more, major mall developers including Simon (SPG), Tanger (SKT) and Westfield are seeing vacant spaces fill back up. The turnoverover is providing a good opportunity to renovate and freshen up interiors, another tactic that is helping to keep malls at the forefront of shoppers' minds.

Malls are also opening their arms to stores traditionally considered off-mall. For example, Australia-based mall developer Westfield is welcoming stores onto its mall properties that tap into a lower price range. Westfield, for example, has 9 Target (TGT, Fortune 500) stores in its properties.* (And some retailers, Fortune recently noted, are creating "stores within stores" to earn rent on their unused square footage.)

The company has also been renovating its property by installing movie theaters, gyms, grocery stores and even hotels next to the lineup of fashion retailers. That's an industry trend, Johnson says.

Customers don't actually see a conflict between shopping at a high end clothing store and a Target in the same space, says Westfield spokeswoman Katy Dickey -- rather, they want it all. They also want to access stores easily. That means making changes down to the architectural level. For instance, developers are turning malls built like customer-trapping chutes into more open places with access to all major stores from multiple entrances.

Some of the most promising new developments by successful mall builders in mild climates are completely open-air, says Johnson. They don't feel very mall-like in the traditional sense.

Not that the mall model isn't sound, says Dickey. "I think the bones are still good. There's convenient parking and a wide range of goods and services -- those are the bones. They need to be well dressed. Not expensively dressed, but appealingly dressed."

The new generation of malls needs to be built with every kind of store, all of them as easy to access as a Safeway (SWY, Fortune 500). Then, she says, as the positive results from Westfield's renovations show, customers will stay longer and spend more.

*Editor's note: An earlier version of this story said Westfield would be bringing 9 Target stores into its properties this year. The sentence has been corrected. An earlier version of this story referred to the retail consulting firm mentioned as Consumer Growth Partners. The firm's name is Customer Growth Partners. The sentences have been corrected.