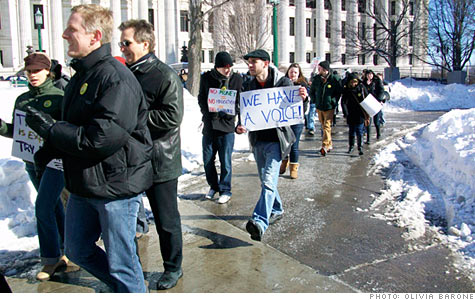 Students from the University at Albany-SUNY protest a proposed $100 million budget cut to the State University of New York. By Anna SpinnerFebruary 16, 2011: 5:27 AM ET

NEW YORK (CNNMoney) -- Students at the University at Albany might have to say goodbye to the theater program. And in Reno, the University of Nevada's German studies program will soon be history.

Facing declining tax revenues in the wake of the Great Recession, states are slashing funding for higher education, forcing many colleges to eliminate majors and entire departments.

While administrators say they're trimming less popular areas that will have a smaller impact, some students are reeling from the changes. The cuts are forcing many to alter plans, change majors or even switch schools, and some worry that the elimination of their degrees will hurt their job searches after graduation.

"I'm hoping that when I apply for jobs, they'll be able to look past the fact that my university cut my program," said Victoria Sheehan, a French major at the University at Albany, State University of New York, whose program is a potential target.

Last October when the university announced that her program was under consideration for closure, the sophomore put her plans to study abroad on hold, and loaded up with French classes to finish her requirements as quickly as possible.

While the school assured students it would allow current majors to complete their studies, she's worried that administrators might pull the plug early.

Because he has to repeat classes, he said the move has delayed his graduation by at least a year. But he thinks it's better than a diploma from a defunct program, which could be a strike against him in the eyes of potential employers.

"If they find out the department doesn't exist anymore it might send the wrong impression," he said. "You can't explain that because you might not get the chance."

Since 2008, at least 43 states have cut budgets for public higher education, according to a 2010 report by the Center on Budget and Policy Priorities, a left-leaning think tank. State higher education spending nationwide dropped $3.5 billion in fiscal 2010 from the year earlier, according to a report from the Center for the Study of Education Policy at Illinois State University.

The University at Albany, was forced to make cuts after losing $12 million in state funding last year. Administrators looked at factors like enrollment trends, said Edelgard Wulfert, dean of the College of Arts and Sciences.

For example, the French department has had a steady decline in majors over the years and Wulfert expects that will continue. It has seven full-time professors teaching 35 to 40 student majors each year. By contrast, the communications program has the same number of faculty and 550 majors.

Provost Marc Johnson of the University of Nevada, Reno, used a similar philosophy to explain his decision to eliminate 23 programs and sharply reduce six others. Some 350 students, including Schubert, were affected by the reorganization, but the changes helped insulate the rest of the school, he said.

"Are we narrower? Yes," he said. "But by cutting some areas strategically, we are able to maintain the current quality and size of other programs."

Governors are now introducing their budgets for fiscal 2012, bringing new rounds of cuts for higher education.

And Gov. Bobby Jindal of Louisiana asked the state's Board of Regents to assess the possibility of merging the State University of New Orleans and Southern University at New Orleans, eliminating duplicate departments.

Louisiana's Board of Regents is already considering 450 degree programs for elimination across the state's 19 public colleges, universities and professional schools. That's one-third of all programs offered.

In the past high-demand programs like teaching were excluded from cuts, said Meg Casper, a spokeswoman for the board. "This go-around we have not excluded any programs."