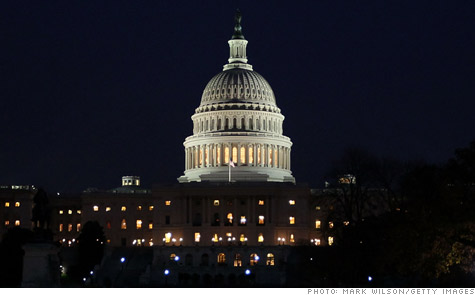 NEW YORK (CNNMoney.com) -- The countdown to a possible government shutdown is on.

If lawmakers don't pass a funding extension by March 4, the government will shift to performing essential operations only. That could mean that government workers would stay home, national parks and museums would close and cleanup at toxic waste sites would stop.

It's difficult to predict how the current government would respond to a shutdown, because each federal agency is responsible for crafting and updating its own "shutdown plan."

Those plans are not made public. But the past offers some clues.

As a result, the government closed 368 National Park Service sites, along with national museums and monuments, according to a Congressional Research Service report.

A shutdown would also result in the furlough of hundreds of thousands of federal employees, but the government would keep essential services -- like air traffic control, and the national security apparatus -- in full operating mode.

And yes, the mail will still be delivered.

Still, a large number of federal workers would be asked to stay home.

"When we go into a funding hiatus, this restricts activities ... and agencies are going to trim back the number of people who actually show up at the office," Denise Fantone, director of strategic issues at the Government Accountability Office, told CNNMoney the last time a shutdown seemed likely. "The first thing any agency is going to do is pull out their list of essential personnel."

The longer the shutdown goes on, the trickier it gets for agencies to define "essential personnel."

During the last long-term shutdown, the Social Security Administration kept enough staff in place to ensure benefits were paid out, but new claims weren't being processed. As the shutdown wore on, the agency recalled workers to start processing new claims.

What has to happen

With Congress in recess this week, lawmakers will have only four working days to pass a spending bill before the current temporary measure expires.

If lawmakers can't strike a long-term deal that both Senate Democrats and conservative House Republicans will go along with, Congress might resort to passing another short-term measure that would fund the government while negotiations continue on a deal for the rest of the fiscal year.

Typically, lawmakers pass 12 appropriation bills for the president's approval. Those bills give federal agencies the legal authority to spend and conduct business.

This year, not one of the 12 has been approved by the Senate, and Congress has instead relied on short-term measures called "continuing resolutions" in order to fund the government.