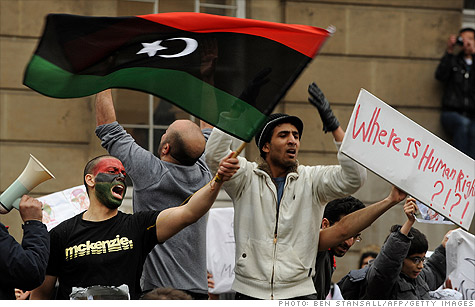 The International Energy Agency says stockpiles in industrial countries plus OPEC reserves can more than handle any disruption from the recent violence. By Steve Hargreaves, senior writerFebruary 22, 2011: 3:44 PM ET

NEW YORK (CNNMoney) -- Don't panic, the world has plenty of oil to cover any loss in Libyan production. That's the message the head of the International Energy Agency, the group formed to protect against global energy supply disruptions, sent the market on Tuesday.

"We have strategic stockpiles of 1.6 billion barrels and I know that OPEC has a good spare capacity," IEA chief Nabuo Tanaka told reporters at an OPEC oil ministers meeting in Saudi Arabia.

Gauging the market reaction, it appears Tanaka's message has fallen on deaf ears.

U.S. crude spiked over 7% Tuesday to $96.48 a barrel as violence swept Libya and traders fretted over the stability of other large oil producing countries in the Middle East.

Tanaka is right -- the world should be able to deal with a disruption of Libyan crude.

Libya produces about 1.6 million barrels a day; a sizable amount but just a fraction of the world's overall 87.5 million barrel-a-day appetite.

Ordinarily, if oil supplies were tight, a 1.6 million barrel-a-day disruption would certainly be a problem.

But the recession has left oil stockpiles near all-time highs. Oil stockpiles are crude supplies owned by oil companies, distributors or refiners that are stored in on-shore tank farms or offshore on ships.

In the United States alone, stockpiles stand at 345 million barrels. That's far above the usual amount, according to the Energy Information Agency.

Then there are the strategic petroleum reserves -- the 1.6 billion barrels of oil referred to by IEA's Tanaka. These are of oil reserves owned and stored by industrialized nations around the world.

In the U.S., it consists of over 700 million barrels of oil stored deep underground in man-made salt caverns in Texas and Louisiana.

Formed after the Arab oil embargo in the early 1970s which crippled oil dependent nations around the world, IEA coordinates with member countries to move these stockpiles around to cover shortages and prevent price spikes.

The stockpiles are designed to provide temporary coverage until additional oil production capacity can be brought online. Turning on the taps and shipping the oil to market might take a month or so.

Currently, almost all additional production capacity lies in Saudi Arabia. The Saudi's are said to be able to pump an additional 4 million barrels a day. That's more than enough to cover a shortage from Libya.

What really has traders nervous, and is likely a driving factor behind Tuesday's oil price spike is if the violence spreads to Saudi Arabia. If that happens it'll be more than just Saudi spare oil at stake -- their massive 8 million barrel per day output could be at risk as well.