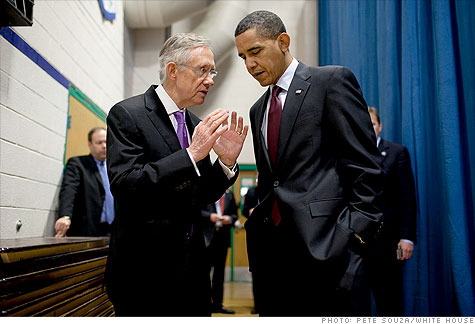 NEW YORK (CNNMoney) -- What happens to Social Security if the government shuts down?

"People don't get their Social Security checks." That was President Obama at a press conference last week.

And this is Harry Reid, the top Democrat in the Senate, in a statement on Tuesday: "A shutdown could ... mean no Social Security checks for seniors."

The Democrats are saber rattling, hoping to portray Republicans as irresponsible. And the claim has been repeated by other top Democrats.

Here's the rub: It doesn't appear to be true.

During the last major shutdown, which lasted about a month starting in late 1995, the Social Security Administration mailed checks throughout the crisis, and a close reading of established law makes clear the agency has the legal authority to do so again.

"I am absolutely sure the checks would be sent out," said John F. Cooney, a partner at law firm Venable who designed shutdown plans for the government while employed at the Office of Management and Budget.

Robert Reischauer, president of the Urban Institute and a trustee of the Social Security and Medicare trust funds, backed that view, saying claims that benefits won't be paid are "not true."

The legal case is pretty clear. In 1995, President Clinton's lawyers in the Department of Justice laid out how federal agencies should operate if Congress failed to appropriate funds.

At the time, Clinton's lawyers pointed out that Social Security checks could be mailed during a shutdown, because the program doesn't need Congress to authorize funds for it each year. Instead, Social Security benefits are paid from the program's trust fund.

"The shutdown refers to discretionary spending, and Social Security is mandatory spending. It doesn't need an appropriations bill to go forward," Reischauer said.

And because Social Security benefits -- which go to roughly 60 million Americans -- are paid out of the trust fund, the agency has the implied legal authority to keep paying staffers who administer them.

That's exactly what happened in 1995-1996. While some Social Security Administration employees were sent home, the agency's official written history notes that essential staff stayed on to make sure benefits were paid.

"The majority of the employees retained were in direct service positions to ensure the continuance of benefits to currently enrolled Social Security," the document reads.

According to Cooney, that legal interpretation has been supported by both Republican and Democratic administrations.

The White House, Majority Leader Reid and the Office of Management and Budget did not respond when asked by CNNMoney for clarification.

What does happen in a shutdown

To be sure, a government shutdown would have severe consequences. In 1995-1996, the government closed 368 National Park Service sites, along with national museums and monuments, and cleanup at toxic waste sites stopped, according to the Congressional Research Service.

Each government agency is required to produce a plan that it would implement in the event of a shutdown and to file it with the Office of Management and Budget.

OMB declined to make those plans available to CNNMoney, but it is likely the Social Security Administration's plan would result in a sizeable number of non-essential employees staying home.

But even once a shutdown goes into effect, agencies have some room to maneuver.

But with Congress in recess this week, lawmakers will have only four working days to pass a spending bill before the current temporary measure expires.

On Tuesday, OMB said it is prepared for "any contingency" and so are all agencies, but that a shutdown is unlikely.

"All of this is besides the point since, as the congressional leadership has said on a number of occasions and as the president has made clear, no one anticipates or wants a government shutdown," Kenneth Baer, OMB communications director, said in a statement.

The outcome of this standoff remains to be seen. While the last major shutdown happened 15 years ago, that impasse resulted from a Democratic president bumping heads with a willful Republican-controlled House that wanted to lower spending.

That episode is generally considered a major political victory for Clinton, and a defeat for Republicans who were viewed by the public as obstructionist.