Gas prices: 'Most expensive February ever' 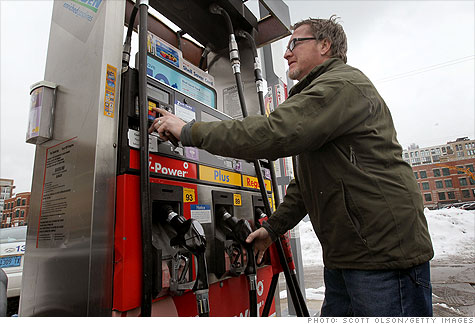 The national average price for a gallon of regular gas rose 5.9 cents to $3.287, motorist group AAA said Friday. That marks the third day in a row that prices have risen, and brings the national average to the highest level since October 2008.

So far this week, gas prices have increased nearly 12 cents a gallon. And analysts expect prices to continue higher in the next few days following a sharp rise in the price of crude oil.

Gas prices were highest in Hawaii, where drivers paid $3.757 a gallon, on average. Wyoming had the lowest gas prices at roughly, $3.014 a gallon.

"This will definitely be the most expensive February ever," he said, adding that gas prices are typically lower during the winter months.

The jump in pump prices follows a surge in prices for crude oil, the main ingredient in gasoline. Oil prices were holding near $98 a barrel early Friday morning, one day after prices hit a high of $103 a barrel -- the highest since October 2008.

Analysts expect prices to continue rising over the next few days, since gas prices typically lag trends in the oil market.

The spike in oil this week could translate to an increase in gas prices of 37 cents per gallon in the coming weeks, according Moody's Analytics economist Chris Lafakis. He estimates that for every $1 increase in the price of oil, retail gas prices typically rise 2.5 cents a gallon.

Economists warn that an energy price shock could hurt the economic recovery in the United States. In general, every $1 increase in the price of oil costs consumers $1 billion over the course of a year.

That's concerning because consumer spending makes up the bulk of U.S. gross domestic product, the broadest measure of economic growth.

The government said Friday that GDP was revised lower to an annual growth rate of 2.8% in the three months ending in December. The initial reading had been for a 3.2% growth rate in the period.

Oil prices have been driven higher by political unrest in North Africa and the Middle East, where much of the world's oil comes from. Despite the surge in prices this week, the amount of oil that has been taken off the world market has been relatively minimal.