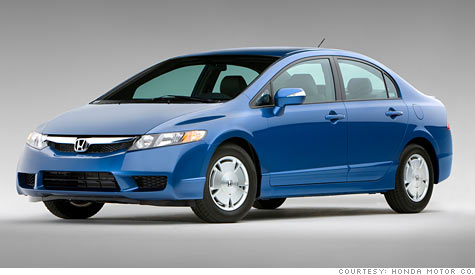 "My mileage went from 40 mpg to 25-28 mpg after a software upgrade last year," one woman said in a comment posted earlier this month on the automotive Web site Edmunds.com.

The software patch followed years of complaints that battery packs on the Civic Hybrid were failing prematurely.

Batteries in hybrid cars are generally expected to last for 100,000 miles or more. Consumer Reports magazine recently tested a 2002 Toyota Prius with over 200,000 miles on it and, after comparing test results with those of an identical car tested when it was new, found virtually no change.

But many people posting on Internet discussion boards complained that Honda Civic Hybrid battery performance faded after just 30,000 to 50,000 miles.

"I have a 2007 Civic Hybrid that began exhibiting gradually degrading battery performance at around 40,000," wrote one person on the Edmunds.com discussion board.

In some cases, Civic Hybrid owners were able to have the battery replaced under warranty. When not covered under the car's 8-year/80,000 mile hybrid component warranty, a replacement battery costs about $2,000, plus installation charges.

A Honda spokesman would not discuss the Civic Hybrid battery and software issues because they are the subject of lawsuits against the automaker.

Consumer Reports' surveys show that, while battery problems occur in only a few Civic Hybrids, the car has a higher rate of battery trouble than do Toyota Prius Hybrids or Ford Escape Hybrids, said David Champion, heading of auto testing for the magazine.

Complaints like these can be damaging to an automaker's reputation, especially when they focus so consistently on a specific model.

"You just don't see these discussions around the Prius or the Escape," said Bob McDonald, who runs the hybrid vehicle message boards on Edmunds.com.

The fix that maybe wasn't

Honda's software update altered the way the car used its hybrid system and was supposed to reduce wear on the battery pack without reducing fuel economy.

Owners claim the new software only made matters worse.

"In a couple cases it seemed as if the car did not want to accelerate from a stopped position," Honda Civic Hybrid owner Tim Lake wrote in an e-mail. "This has put me in a dangerous situation more than once when trying to cross an intersection."

Rhonald Shaw said the fuel economy in his Civic Hybrid dropped from the mid-40-mile per gallon range down to the low 30's, or about the same as a non-hybrid Civic.

Consumer Reports' Champion cautioned against putting too much credence in drivers' own fuel economy claims, since they're not based on carefully run tests.

On-line message boards, in general, can also tend to magnify the occurrence of what may be relatively rare problems, Champion said. People having trouble with their car tend to seek out forums and post messages while those who aren't having problems stay silent.

Not every owner was ultimately dissatisfied with Honda's repairs. Danny Nail, a Civic Hybrid owner in Florida, wrote in an email that the software patch did not help but that the situation was ultimately resolved when his battery was also replaced.

"The car now functions normally and gets good mileage," he wrote.

Honda will release an entirely new version of the Civic Hybrid this spring. The new Civic Hybrid will have a more powerful lithium-ion battery that is completely different from the ones used in past versions.