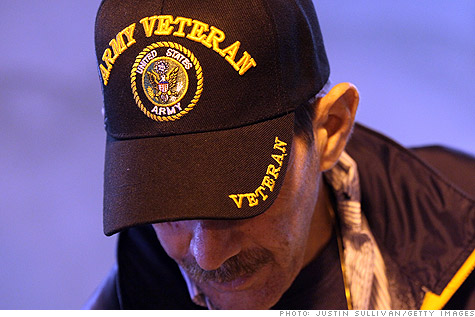 As many as 11,000 homeless veterans could lose housing vouchers if proposed cuts go through. By Jennifer Liberto, senior writerMarch 1, 2011: 6:25 PM ET

It's the cut that Democrats like to point to when they accuse of Republicans of going too far. And Democrats have even started to make it a campaign issue.

Republicans are quick to point out that the cuts won't impact veterans who were homeless but now receive housing vouchers. Vouchers give homeless veterans a place to live for a year and can be renewed annually, assuming federal funding is available.

The cuts would hurt some 11,000 homeless veterans who qualify for housing this year but have yet to receive vouchers.

"It's really unnecessarily prolonging homelessness for another year," said John Driscoll, president of the National Coalition for Homeless Veterans in Washington.

The cut is among hundreds tucked into the spending bill that House Republicans passed last week that slashed $61 billion in the remaining six months of the 2011 fiscal year.

"Until all of the vouchers are used, there is no point in providing additional vouchers that will sit unused," said Jennifer Hing, spokeswoman for the House Appropriations Committee.

But it generally takes 8 months, start to finish, to get a veteran into housing, according to Driscoll. The veterans' agency says the average time is four months. Driscoll said that lawmakers who want to cut program funding misunderstand the process.

Driscoll said that homeless veterans often suffer from mental health and substance abuse problems. Studies have shown they remain chronically homeless, unless the federal government steps up to put a roof over their heads.

That's why housing homeless veterans is a top priority for President Obama, who has called for more vouchers with a goal of ending veteran homelessness in 5 years. The voucher program was among the few that the White House highlighted for more funding in 2012.

The administration estimates that on a single night in January 2009, 75,600 veterans were homeless. At the current funding levels, federal officials are nearly halfway to ending veteran homelessness.

Congressional Democrats say they'll fight for the program to house homeless veterans. During the budget cut debate, Rep. Bob Filner of California tried to blunt the cut but was unsuccessful.

Democrats are also using the issue as fodder for the 2012 elections. Last week, the Democratic Congressional Campaign Committee launched a new series of automated calls to voters in the home districts of 7 Republicans who supported the bill. In the so-called "robo-calls," a voice compares housing subsidies for homeless veterans to tax breaks for the oil and gas sector, which the GOP tends to support.

"The DCCC will continue going district by district to hold House Republicans accountable for forcing homeless veterans to sleep in the streets," said Jesse Ferguson of the Democratic Congressional Campaign Committee.