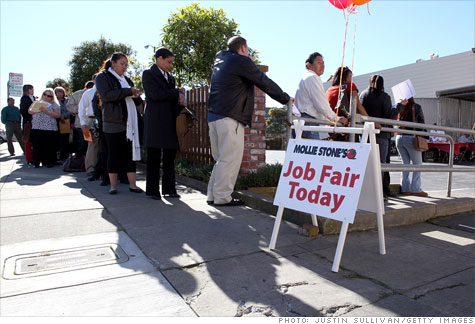 Dean Baker is co-director of the Center for Economic and Policy Research.

The politicians in Washington and the media have been busy setting the scene for a great battle over the 2011 budget.

The newly empowered congressional Republicans are demanding large cuts to get spending under control. President Obama and the Democrats in the Senate promise to defend important public programs. This heated political contest is taking place against a backdrop of a possible government shutdown, just like two soldiers crossing swords in a burning building.

Yes, this is exciting theater. Meanwhile, no one is paying attention to the fact that 25 million people are unemployed, underemployed or have given up looking for work altogether.

The reason for so much unemployment is not a secret; we don't have enough demand in the economy. The housing bubble had been driving the economy until it collapsed beginning in 2007.

When the bubble burst, the millions of jobs created by the bubble-driven construction boom disappeared. The plunge in house prices also brought an end to the consumption boom, which had been driven by housing wealth.

Together, the drop in construction and consumption led to a falloff in annual demand of more than $1.2 trillion, almost 10% of the economy.

The private sector will not replace this demand any time soon. And that means we need additional government spending to generate jobs, or we are left with very high rates of unemployment.

Note that this fact has nothing to do with whether we like the government or like the private sector more.

Private businesses are not going to start expanding and hiring people because we cut government spending.

Just go ask you nearest storeowner how many more people she will hire if the government cuts its spending.

Businesses will expand and hire people when they see that there is more demand for their products. The federal government is the only force with the ability to create enough demand to get the economy back on its feet right now.

The stimulus package Congress enacted was a step in the right direction, but it was nowhere near large enough. When you cut through the hype, the size of the annual stimulus in 2009 and 2010 was about $300 billion a year. Roughly half of this was offset by cutbacks at the state and local level. Translation: We were trying to fill a $1.2 trillion hole with a net stimulus from the government sector of $150 billion.

While research shows the stimulus was actually more effective than predicted, we need much more to get the unemployment rate down to normal levels. Unfortunately, the politicians in Washington are too scared to say the simple truth: We need more spending to get the economy back on its feet, not less.

This is why the public has already lost the budget debate. The elites who dominate the national political agenda have entirely written jobs out of the picture. They have created a bogeyman in the form of the national debt and told everyone that we have to worry about.

Now we have both President Obama and Republican leadership telling us how concerned they are to control the debt and trying to score points with the media in the process. The public can only lose in this picture.

On the one side we may end up with status quo budgets, which will give us unemployment rates above 6% for the next five years, according to both Obama and the Congressional Budget Office. Or we get a Republican budget with large cuts that will slow growth further and lead to even higher rates of unemployment. In addition, this will reduce spending in areas like cancer research and make it harder for kids to go to college.

This all could be entertaining if there weren't tens of millions of people having their lives ruined because the breadwinner(s) in the families can't find a job or can't work enough hours to pay the bills. The only way the public wins in this sort of budget standoff is if we force both parties to stop playing games and start taking measures to boost the economy and create jobs.

How to tame military health costs