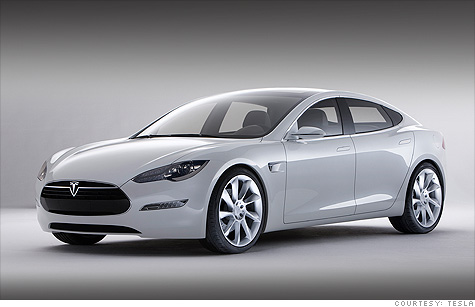 Tesla Model S customers will be able to choose how much driving range they wish to pay for. Peter Valdes-Dapena, senior writerMarch 7, 2011: 5:43 PM ET
Follow Peter on Twitter: @PeterDrives

Prices for the plug-in electric Model S sedan will start at $57,400 but the vehicle will be eligible for a $7,500 tax credit. The base model will have a driving range of 160 miles, Tesla said, but buyers will be able to pay more for versions with larger battery packs and longer driving ranges.

In fact, the first 1,000 cars off Tesla production line -- housed in a California factory that had produced cars for General Motors and Toyota -- will be the Model S Signature Series, a version capable of driving 300 miles on a charge.

These cars are expected to cost about $20,000 more than the base model, Tesla said on its website. For $10,000 over the base price, customers will be offered a car with a 230 mile driving range.

The Model S will be able to go from zero to 60 miles per hour in about 5.6 seconds, Tesla boasts, and will have a top speed of 125 miles per hour.

The car will be able to seat up seven people when equipped with optional third row of rear-facing seats.

The Model S will enter a market rapidly filling with plug-in car options including General Motors' Chevrolet Volt and the Nissan Leaf, which went on sale late last year, and the high-priced Fisker Karma, also expected to enter production next year.