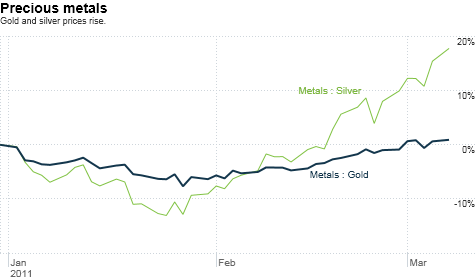 Click chart for more on gold, silver and other commodities By Ben Rooney, staff reporterMarch 8, 2011: 7:11 AM ET

In Libya, fighting between rebels and forces loyal to Libyan leader Moammar Gadhafi continued to exact heavy tolls Monday, with an estimated 1,000 to 2,000 deaths so far.

The strife in Libya follows relatively non-violent uprisings in Tunisia and Egypt earlier this year. Other countries in the region have also been shaken by protests, including Yemen, Oman and Bahrain.

The unrest has pushed oil prices sharply higher in recent weeks as investors worry that supplies could be disrupted from crude exporting nations. Gold prices often rise when the global political and economic outlook turns cloudy, since precious metals are seen as safer bets than stocks or bonds in times of uncertainty.

In addition to geopolitical concerns, gold has been supported by worries about rising inflation.

Gold is seen as a hedge against inflation because the metal tends to hold its value when consumer and wholesale prices rise.

Speculators double down on oil