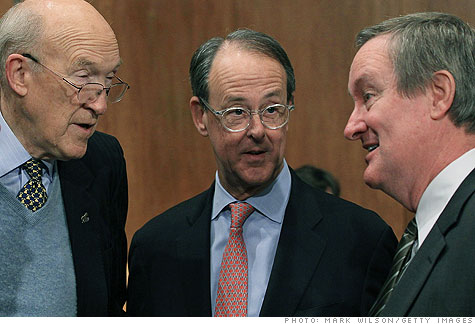 WASHINGTON (CNNMoney) -- As lawmakers continued to butt heads over how much spending should be cut over the next seven months, a few senators on Tuesday were trying to keep the focus where they think it belongs -- the next several decades.

Crapo was speaking on Capitol Hill at the launch of the Moment of Truth project, created to help build momentum for a bipartisan plan to reduce the debt. He is part of a small group of senators -- three Democrats and three Republicans known as the "Gang of 6" -- trying to craft legislation to that end.

The group's starting point is the plan presented last December by President Obama's debt commission, which was led by former Republican Sen. Alan Simpson and Erskine Bowles, who served as White House chief of staff under President Clinton.

The commission's proposal would cut $4 trillion in debt over a decade. It would set caps on spending and revenue, overhaul the tax code by eliminating most tax breaks and lowering rates, reduce health care and defense spending and make Social Security solvent for the next 75 years.

In short, the commission wrangled both parties' sacred cows.

Crapo sat on the panel and voted for its report. No one liked every part of the plan, he said Tuesday, but the 61% who signed on to it agreed that adopting a comprehensive long-term plan would do more to help the economy grow by boosting investor and business confidence than any one part of the plan could help or hurt the economy.

Another panel member, Dave Cote, the CEO of Honeywell International (HON, Fortune 500), said the current sparring over the 2011 budget is like "chasing ants and ignoring the elephants."

It will be up to this Congress, Cote said, to step up and protect the country from a fiscal crisis that could be far worse than the financial crisis in 2008.

If bond investors lose confidence that the United States will rein in its debt, they could without warning start demanding higher interest rates. In turn, a spike in rates would make consumer loans more expensive and hurt jobs and the economy.

"It's Main Street that gets hurt because we didn't act when we should have," Cote said. "It's been said many times but it's still true: No guts, no glory."

But for the country to act proactively will require bipartisan support -- not just from lawmakers but from business leaders and the public, said Democratic Sen. Mark Warner, another member of the Gang of 6.

Generating that political will is by far the hardest task facing the lawmakers.

"Right now we have a lot of work to do just the six of us," said Dick Durbin, who is the No. 2 Democrat in the Senate and sat on the president's commission.

Durbin noted that there are still strongly held views among members about what to incorporate in the legislation.

And he allowed that the group may fail in its efforts, given how hard it will be to get 60 votes of support in the Senate. But if they don't succeed, he said, short of a crisis he's not sure when the next opportunity for bipartisan agreement will come around.

Both sides exaggerate impact of cuts