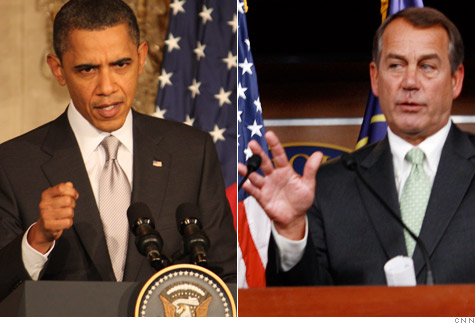 President Obama and House Speaker John Boehner don't agree on much in the way of spending cuts. By Charles Riley, staff reporterMarch 9, 2011: 11:41 AM ET

The White House says yes. President Obama's budget for 2012 includes millions more dollars to enforce the tax code -- money that the IRS would use to identify and pursue tax cheats.

Turns out, IRS agents make good on the investment, collecting $3 to $4 for every greenback spent tracking down money owed to the government. The funds help bring down the deficit.

One problem: The IRS is facing a potential big cut in its budget.

The Republican spending plan for the rest of the fiscal year would strip the IRS of $600 million in funding -- including $285 million from the agency's enforcement budget. In addition to their fervor to cut spending, some Republicans want to starve the IRS of resources it needs to implement last year's health care reform law.

But the IRS says that cuts of that size would reduce revenue collection by at least $4.1 billion as the agency rolled back enforcement activities.

Democratic lawmakers are crying foul, saying that if the GOP was serious about the deficit, it would be giving more money to the IRS.

The agency is already feeling a budget crunch, because it has been stuck at 2010 funding levels after lawmakers failed to pass a budget even though the fiscal year began 159 days ago.

The GOP plan for the remaining seven months of the fiscal year stands in stark contrast to the approach being pursued by Obama.

The White House has asked for more money for the IRS in each of its budgets, and wants a 9% increase from current levels in 2012.

Over the last decade, the agency has sharply increased the number of audits, liens and property seizures it carries out. The IRS believes that such enforcement results in additional gains as more Americans pay their taxes out of fear of an audit.

If Obama's budget were to make it through Congress, the IRS estimates that the increase in its enforcement budget would boost general revenue by more than $1.3 billion annually by 2014.

It's easy to see the plan's appeal -- revenue goes up, while tax rates and spending levels stay static. Any money spent on increased IRS enforcement is easily covered by the returns.

But not everyone is convinced by the IRS argument that increased enforcement means more tax revenue.

"Nobody checks if those return rates are valid, or where the law of diminishing marginal returns kicks in," said J.D. Foster, a senior fellow at the conservative Heritage Foundation.

Even more suspect, according to Foster, is the IRS claim that its enforcement efforts result in a secondary deterrent factor that encourages Americans to pay their taxes.

"It's the silliest argument of all," said Foster. "If the the IRS gets a billion more for enforcement, does anybody know that? Of course not."

Some disagree, including Robert McKenzie, a member of the IRS Advisory Council and lawyer at Arnstein & Lehr, who worked at the IRS collection division in the 1970s.

McKenzie says the effect is very real, because in the "dark recesses of every American mind" exists a healthy fear of an IRS audit.

For the IRS, the threat of cuts wouldn't just mean less money for enforcement, it would also mean cutting back on jobs.

If funding drops by $600 million, the agency might be forced to lay off thousands of workers, according to Colleen Kelley, president of the National Treasury Employees Union, which represents IRS employees.

"If [the House bill] passes, there is no way you can make that money up in anything other than at some point ... cutting a lot of positions," Kelley said.

McKenzie, for one, thinks politics should be left aside.

"I think it's mom and apple pie. Find people and ask them to pay the correct amount of tax," he said.