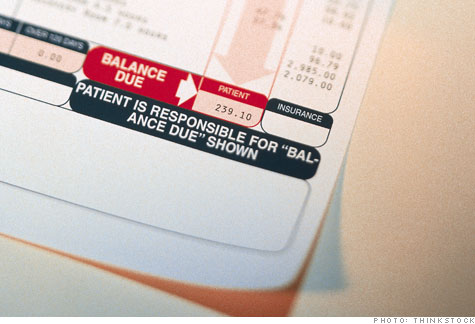 NEW YORK (CNNMoney) -- Come 2012, millions of Americans who get health care coverage through their employer should brace for some big changes.

Charging higher contributions for dependent coverage and dropping retiree accounts, are among the steps companies are considering as they fight rising medical costs and new expenses tied to health reform, according to a new report Thursday from human resources consulting firm Towers Watson.

Here are some important findings:

Your retiree health plans may be dropped: "This is one of the most critical findings of our survey," said Julie Stone, senior consultant with Towers Watson.

The report showed that more than a quarter of companies polled plan to drop retiree health plans in 2012 for some employees, such as new hires.

You will pay more per dependent: 68% of companies polled said that in order to offset higher costs, they would raise employee contributions for each dependent they covered.

Get ready for spouse penalties: Health coverage for spouses can cost an employer about $5,000 annually.

To offset that expense, Stone said companies are cracking down by imposing penalties or surcharges on "ineligible" spouses.

"We're seeing renewed interest in spouse surcharges," Stone said. If an employee's husband or wife has access to health insurance through their own job but refuses it to be added to his or her spouse's plan, a surcharge will be added.

Getting serious about good health: More companies are thinking about getting tough on employees to encourage healthier lifestyles.

Despite big investments in wellness programs, the report said employers have found it hard to get their workers to participate in voluntary disease management, smoking cessation or weight loss programs.

"There is discussion among some employers about making a complete health risk assessment a requirement in order to get health benefits," Stone said.

Pick your doctor carefully: Stone said companies may get more involved in helping employees manage their health costs in 2012.

"Many plans offer a tiered network of [medical] providers based on their performance," said Stone. Companies could tweak their plans next year to offer more coverage to employees if they pick a "high-quality" provider versus one with a lower performance score, she said.

In 2007, the Towers Watson survey of employers showed they were 73% confident that they'd be offering health insurance in a decade. That dropped sharply to 38% in 2010.

The firm surveyed 588 employers between November 2010 and January 2011, with a total of 9.2 million full-time workers.

"It is a reflection of uncertainty about how health reform will play out," Stone said.