Gas prices: Up 37 cents and counting 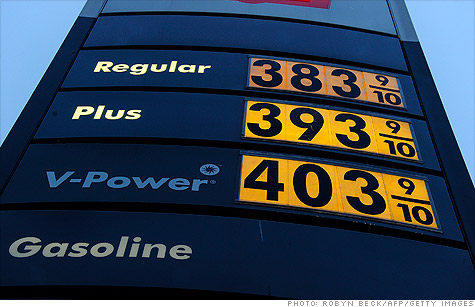 NEW YORK (CNNMoney) -- If you think gasoline is expensive now, just wait. In the weeks to come, you'll be looking back at today's prices with a poignant sense of longing, if the forecasts become reality.

Gasoline prices just keep going up. Prices jumped for the 17th straight day Friday, increasing by 37 cents since Feb. 22 to a nationwide average of $3.542 per gallon, according to motorist group AAA.

And it's not over.

"Given what's going on, it could frankly go to $4," said Joseph Stanislaw, senior adviser at consulting company Deloitte.

The earthquake in Japan, for all its devastation and loss of human life, is not contributing to high fuel prices, according to experts. High gas prices are being driven by anxiety over the ongoing instability in the Middle East and North Africa, where regimes are being threatened and toppled. The civil war in Libya and discontent with the Saudi Arabian monarchy are the main drivers for oil price volatility, which is the main culprit behind the run-up in gas.

He added that if the geopolitical strife in the Middle East and North Africa "calms down," the price of gas could drop closer to $3 per gallon in the U.S.

How to score a gas discount

The good news is they won't rise forever.

Tom Kloza, the chief oil analyst for Oil Price Information Service, believes that the current swell in gas prices will likely peak at a nationwide average of $3.75 per gallon. And that peak will come as U.S. demand tapers off.

"There area lot of people who live paycheck to paycheck, and they will cut back," he said.

Gas prices are a joke ... in Norway

The highest gas price in the United States is in Hawaii, where it sells for a statewide average of $3.97 a gallon. The Aloha State is hampered by shipping and distribution costs to its remote locale in the middle of the Pacific. Prices are almost that high in California, at nearly $3.94 a gallon. Even though California is an oil-producing state, the West Coast is more remote, compared to the East Coast as far as its access to fuel imports.

But even the highest prices in the U.S. are child's play compared to Europe, even in oil producing nations like Norway. Like other members of the European Union, Norway taxes its gasoline more heavily that the U.S. That's why the current gas prices in Norway are $9.60 per gallon, which is more than California and Hawaii combined.