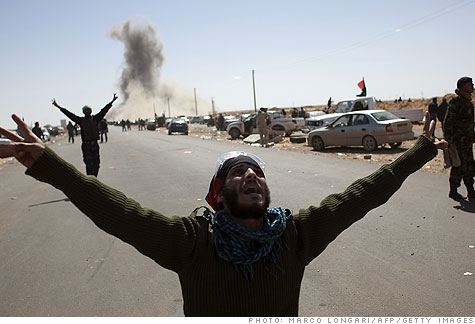 Addressing energy industry leaders meeting in Houston, the former Secretary of State says a transition to democracy is far from guaranteed. By Steve Hargreaves, senior writerMarch 11, 2011: 8:36 AM ET

HOUSTON (CNNMoney) -- Former Secretary of State Henry Kissinger delivered a sobering analysis on the unrest sweeping across the Middle East Thursday, telling leading energy industry experts that the recent protests may not pan out as smoothly as some hope.

Most experts speaking at the conference this week have said that while turmoil and change may come to the Middle East, the end result should be positive for the whole region and that oil supplies should remain stable.

While Kissinger made no prediction on the fate of Middle East oil, he threw cold water on the idea that the transition of power in the region would lead to a new era of democracy there.

"That's wishful thinking," said Kissinger, who as secretary of state in 1973 helped end the war between Israel, Egypt and Syria and largely shaped the current political makeup of the Middle East. "There's evidence of rejection of the previous model, but no evidence of what the new model will be."

Kissinger also said that "the ability of the United States to achieve its security concerns in the short term is now more problematic."

He said what the United States needs is a clear analysis of the situation and well defined objectives in the region.

Turmoil in the Middle East has rocked oil markets over the last several weeks, with the price of crude surging some 10% over fears the unrest in Libya, Tunisia, Bahrain and other places will spread to the oil producing states of the Persian Gulf, particularly Saudi Arabia.

Protests dubbed the "day of rage," are planned in Saudi Arabia for Friday. Authorities in the desert kingdom have deemed them illegal and threatened to quash them by force.