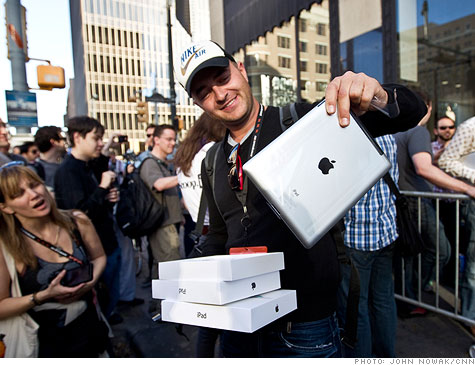 AUSTIN (CNNMoney) -- The new iPads have landed -- and the throngs turned out to greet them.

Apple maintained an air of mystery about its South by Southwest (SXSW) pop-up shop until the very last minute, waiting until barely an hour before launch time to unveil its logo and transform an anonymous, empty corner store in downtown Austin into the epicenter of iPad 2 mania. By then, the line of waiting shoppers stretched for blocks, tipped off by an article in a local newspaper late Wednesday that revealed Apple's plans.

Shopper No. 1, Austin local Sweet John Muehlbauer, turned out at 6:30 a.m. to secure his spot at the head of the line. Right behind was a contingent that traveled much further: Four South Africans, who capped off a 35-hour plane trip to SXSW with a nine-hour wait in the iPad line. It was a spur-of-the-moment decision to queue up, but the group made the most of its wait.

"I'm going to get two for myself," declared Graham Bradford, founder of Cape Town-based Web development firm Graydot. "One as a backup. Or I might give one to my future girlfriend. I don't know who that is yet, but having an iPad 2 should help, right?"

Fifteen minutes before launch time, a squad of Apple employees emerged from the shop -- still covered with opaque paper concealing the view inside -- and began writing out purchase tickets. Most of those waiting rattled off their requests like a fast-food order: "Two 32 gig white Wi-Fis, one 16 gig Verizon 3G in black ..."

But a few customers wanted to drill down into the specs. Tim Street, in from Los Angeles, spent 10 minutes grilling an Apple staffer about prices, data plan options and storage capacity before making his decision: a black 64 GB Wi-Fi iPad and an AT&T 3G 64 GB model, also in black.

The decision took longer than the purchase. At 5:08 p.m., Street emerged from the shop, victoriously waving his iPads aloft. He plans to keep one and share the other around the office at MDialog, a mobile video software developer.

Apple didn't take pre-orders for the iPad 2, forcing those who wanted to get one right away to hop on line. At the company's New York City flagship, hundreds turned out. The first half-dozen lined up 24 hours in advance, braving a drizzle and chilly temperatures.

In Austin -- where the SXSW Interactive show opened Friday morning, drawing more than 10,000 people to the city -- the weather was balmy and the line atmosphere party-like. Many of those waiting already had the first version of the iPad, released less than a year ago, but were eager to trade up to the faster and thinner new model.

But a few were crossing enemy lines. One of the earliest spots in line was held by a shopper wearing an Android t-shirt. Aaron -- "I'm not going to give you my last name," he said -- had no interest in Apple's latest gizmo. "I run Android businesses. No way I'm using one," he said.

His plan: Resell the iPads for a $200 markup. He already had one buyer lined up.

Others had no intention of letting their new prize out of their hands. Surrounded by cheering crowds, a media swarm, and a line stretching for blocks, the iPad 2 launch had the air of a historic -- or religious -- occasion.

IPad D.J. Rana Sobhany lined up to snag two iPads that she plans to press into immediate service for musical sets Friday night.

"Apple has really been pushing the music capabilities of the iPad a lot," she said. This time around, Apple built a lot of native functionality for musical experimentation right into the device: "That really does change everything."

"The poor guys in there are shaking," Graham Bradford reported, emerging from the shop clutching a pair of iPads. "I'm shaking. I'm the first South African to have an iPad!"

iPad line goes around the block in NYC

Verizon vs AT&T iPad 2 plans: Which is cheaper?