Diet Coke may be the new #2, but U.S. soda market is shrinking 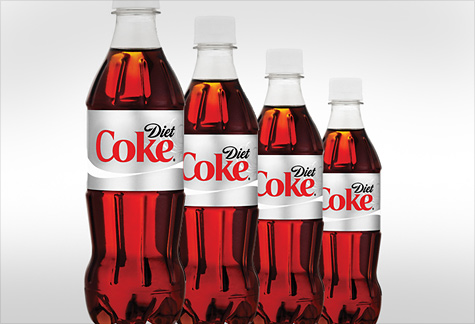 FORTUNE -- The soda world is bubbling with the news that Diet Coke has surpassed Pepsi as the No. 2 carbonated soft drink in the U.S. (regular Coke still reigns). But what's been lost in much of the hoopla is that the industry overall is, well, flat.

I'll abandon the puns now and get to the numbers.

Diet Coke jumped a spot in the U.S. cola wars by simply managing to post smaller volume declines than Pepsi. Diet Coke was down 1% in volume in the U.S. in 2010 while Pepsi fell 4.8%, according to Beverage-Digest.

The trade publication reported that the U.S. carbonated soft drink category fell about 0.5%, but that's better than the 2.1% drop in 2009 and 3% drop the prior year. Because the sector has been shrinking in the U.S., Coke and Diet Coke's market share remained flat even though both lost a small percentage of volume. The soft drink category in the U.S. hasn't seen an increase since 2004, signaling that flagging sales numbers are not just recession driven. The total category's volume has now sunk back down to 1996 levels.

These declines are due to an intersection of two consumer trends that began in the early part of the 2000s, says John Sicher, editor and publisher of Beverage-Digest: "More and more Americans became concerned about calories, and the phenomenal growth of bottled water," he explains. That's also why diet sodas have held up better. The biggest percentage gains last year out of the top-10 carbonated soft drink brands came from diet beverages. Diet Mountain Dew and Diet Dr Pepper both grew in volume more than 5%, and Coke Zero, the no. 11 brand, grew 17.5%.

As U.S. consumers have turned away from soda, big winners along with bottled water include energy drinks, ready-to-drink tea, and sports drinks. In the soda category, what Sanford Bernstein analyst Ali Dibadj calls "the dark stuff" is losing share to non-cola flavors like Dr Pepper. "The colas have gotten a little bit boring to people," he says.

For PepsiCo (PEP, Fortune 500) and Coca-Cola (KO, Fortune 500), the companies' flagship brands are still extremely important but are now just one (albeit important) piece of the pie. "It's not just about the cola wars," says Joe Jacuzzi, a PepsiCo spokesman. "It's about all sorts of things that consumers are looking for these days."

Coca-Cola noted in its annual report that its 2% unit case volume growth in North America was driven by a 5% increase in still beverages. Its Powerade line grew 19%, teas grew 12%, and its Simply line (juices like Simply Orange) was up 23%. PepsiCo reported a mid-single digit increase in its Gatorade brand and a high-single digit rise in its Lipton ready-to-drink tea business.

"Pepsi has done a relatively good job with non-carbonated, but you have to keep supporting your flagship brand, especially when Coke has arguably gotten better at doing that," says HSBC Securities analyst Lauren Torres.

Beverage-Digest's Sicher says not to expect growth anytime soon. "I think that with a decent economy, good marketing, and some innovation, it can be in the flattish range," he notes.

One bright spot: Beverage-Digest reported that even though volume has declined, the retail value of the U.S. consumer soft drink business has grown to $74.2 billion in 2010, 0.4% over 2009. Americans might not be drinking as much soda, but they're willing to pay more for it. "There's been modest price increases that have helped," says Torres. The business, she adds, is "still important and still contributing."