Wanted in Japan: A rebirth of innovation 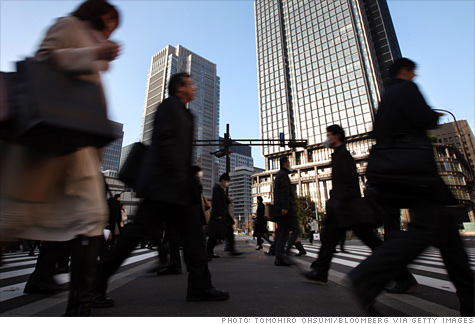 FORTUNE -- There is reason to believe that some kind of material good might eventually result from Japan's disaster, and it's confirmed by the way this thirty-something Japanese manager is responding to it: "I have been a 'risk-averse shosha-man [salary-man]' for 14 years, but I decided to quit my big company job to start my new business this June," he emailed six days after the earthquake. He had made the decision before the catastrophe (and doesn't want to be identified because he hasn't yet told his employer). "After the quake, however, what do you think happened to my mentality? Stronger desire to take the risk to SAVE the nation. Japanese people do a bigger job when they face crisis. My venture will surely start in June, despite the much worse economic situation for a new business to be started."

For anyone who thinks it's callous to talk about the economic effects of a staggering human tragedy, this man -- motivated by a deep desire to help his fellow citizens -- shows why it isn't. If he turns out to be typical, if thousands more decide now is the moment to take bigger risks, then Japan just might get back on an upward path.

It could happen. History shows that an upsurge in entrepreneurialism would be normal in these circumstances. Yet Japan's culture offers plenty of reasons for doubt. And if the risk-taking flame dies back down, then even the supposed general salutary economic effects of disaster won't likely come through in this case. This could be just one big, unredeemed horror.

Hope lives because swelling entrepreneurialism is precisely what's needed to fix Japan's overwhelming economic reality: 20 years of stagnation. It's a remarkable problem for a country that once revolutionized major industries -- autos, steel, electronics, among many others -- and in the 1960s grew around 10% a year. What changed? The great innovators of the post-war years -- Toyota (TM), Nippon Steel, Sony (SNE), for example -- became huge and successful, losing their propensity to create disruptive new technologies.

That's typical, as Harvard Business School professor Clayton Christensen has shown. What's unusual about Japan is that it "played the disruptive game once," as he says, but couldn't do it again. New generations of disruptive companies haven't appeared. A culture that frowns on employees leaving their jobs, a financing system dominated by banks rather than debt markets, and a government with a penchant for directing technology investment -- all have combined to discourage new innovators from creating fast-growing new industries. Result: stagnation.

Which raises the important question of why the disruptive cycle happened that one time. The answer is that it rose from the desperation of World War II. "Many of the societies that have been hyper-entrepreneurial for extended periods, such as Israel, Taiwan, and Ireland, have had two characteristics: severe adversity and broad-based human capital -- educated, intelligent masses," says Babson professor Daniel Isenberg, an entrepreneurship authority with long experience in Japan. "Look at Japan after World War II, and you see the same conditions."

That pattern reflects human nature. As behavioral economists have pointed out, we all see greater value in reducing pain than in gaining pleasure. For that reason, "the biggest opportunities come with addressing acute needs: war, hunger, disease, and disaster," says Isenberg. "People in general become more risk-taking when they have big, threatening problems, and smart and educated people like the Japanese become more innovative as well."

Thus the possibility that this disaster might spark a remedy for Japan's most basic economic problem. But if that doesn't happen, it's unlikely the country will realize the often mentioned but poorly understood benefits that often seem to follow disasters. The whole notion of a post-disaster economic gain is suspect, based on squishy accounting. A company must record a charge when major assets are destroyed, but a country does not. The loss of capital isn't included in GDP, but the money spent to replace it is, producing an apparent but often phony uptick.

Accounting aside, Japan's disaster may be especially costly because earthquakes are different. Over time, countries with frequent climatic disasters such as hurricanes tend to achieve higher economic growth than other countries, says research by Mark Skidmore of Michigan State University and Hideki Toya of Nagoya City University, but not because the disasters lead directly to growth. Weather disasters being somewhat predictable, people can protect themselves, so such disasters tend to wipe out property more than people. As a result, residents in those countries invest relatively less in physical capital and relatively more in human capital, a recipe for economic success over the past century. But earthquakes aren't predictable; they wipe out terrible quantities of human capital, as this one did. The researchers found no evidence of economic benefit.

This disaster probably won't push Japan's government over the fiscal edge. The towering national debt, at 225% of GDP, is by far the highest of any developed nation and second only to Zimbabwe's worldwide. If the government now spends, say, 1.2% of GDP on reconstruction, twice the proportion spent on the 1995 Kobe earthquake, the response would still total less than half its stimulus package in the financial crisis. Even Japan's straitened treasury can probably handle that.

The likeliest outcome is that Japan will come through this catastrophe with impressive speed, but nothing larger will change. Perhaps no country on earth is better equipped to absorb this blow. "The Japanese can emerge from this strong," says Michigan State's Skidmore. "They have this undergirding, this institutional and social framework that's really important." The danger is that this impressive framework, built to support stability and order, may form a solid wall around Japan's economic status quo.

But still -- there's that shosha-man and the many undoubtedly like him who yearn to try their idea for something new, unusual, and possibly disruptive. They've been stifled for decades. The trauma of this moment could release them. These are the circumstances when such turning points arrive.

It's definitely a long shot. For now, it's only a hope. But it is, blessedly, a realistic hope.

Inside the mind of a nuclear flip-flopper