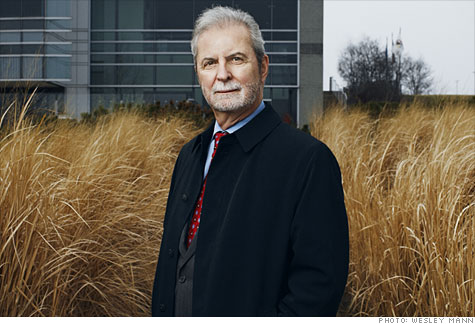 FORTUNE -- You have to pay for quality. That, essentially, is the creed of growth investors like John Calamos. The CEO and founder of Chicago-based Calamos Asset Management, which has $37 billion in assets, focuses on companies with strong earnings prospects. His two biggest growth funds -- Calamos Growth (CVGCX), with $9 billion in assets, and Calamos Growth & Income (CVTCX), with $5 billion -- have beaten 99% of their peers over the past 15 years, returning 15% and 11% a year, respectively. The veteran fund manager, 70, thinks it's a good moment for his investing style.

A. We're positive about the equities market. That's based on valuations -- and right now they're very compelling. Typically the market trades at about 53% of its future cash flows; today that number is about 43%.

The strength in earnings will continue. Obviously companies have great access to capital because rates are very low. They're doing better, trying to manage their margins through productivity enhancements and positioning themselves globally. We think the market will actually reach new highs.

Are you worried about inflation?

We worry about how we'll cope with the government's debt. With it comes the weak dollar, something every investor should have in mind. The bond market makes us a little nervous because rates have gone as low as they can, so there are no capital appreciation opportunities. But even with a rising interest-rate environment, convertible bonds -- hybrid securities that are part bond, part stock -- have done very well in the past. We're still finding good opportunities in both the U.S. and global convertible markets. One we purchased recently was from Sandisk (SNDK), which has a 1.5% coupon and matures in 2017. We really like what the company is doing -- it makes flash memory cards -- and the bond gives us good access to it.

This is the cheapest, relative to the rest of the market, that we've seen them in more than 20 years. The premium of growth stocks to value stocks is very compressed right now. If you take the forward price/earnings ratio of the Russell 1000 growth index and divide it by the P/E for the value index, it's usually 1.5. Today it's about 1.19.

That's typical of where we are in the cycle. As you come out of a recession, value stocks normally do very well. Growth stocks have also done well, but not as well as they should. As the market gets more comfortable with how the economy is doing, growth companies tend to attract investors. That hasn't happened yet, which is why you can buy growth stocks at near-value prices.

Which sectors have the best growth prospects?

Companies are still trying to increase productivity; that usually means technology. One example is Autodesk (ADSK), one of the leading providers of software for engineers, designers, and architects. It makes those industries more efficient. As other companies build infrastructure, they need engineers.

We're also overweight on energy. Commodity prices are going up, and the devaluation of the U.S. dollar will help support energy prices over the long term. If the economy recovers, energy demand will obviously go up. We think the best way to play it is in areas like equipment. National Oilwell Varco (NOV, Fortune 500), a worldwide maker of equipment and components for oil and gas drilling, has a history of pioneering innovations and improving cost effectiveness. It also maintains a healthy balance sheet and generates strong cash flows.

Emerging markets are growing -- too rapidly, some say. Are you avoiding them?

Flows into emerging markets make participation in individual countries a bit more volatile than we like. But the long-term trends, such as the expansion of the middle class around the world, are still there. That's a formidable theme.

We're not as concerned about where the headquarters of companies are -- whether they're in emerging markets or not -- as we are with where they're participating from a revenue point of view. For example, we own Standard Chartered, a British bank that gets nearly all its revenue from outside the country. It's not the fastest-growing bank, but it has good capital ratios and management and the demographic we're looking for. We also like Swatch, the watchmaker. It targets both the high and low end, and has a very strong balance sheet and low debt levels. It's another example of a company whose footprint isn't where its headquarters are.

3 reasons why munis are still safe