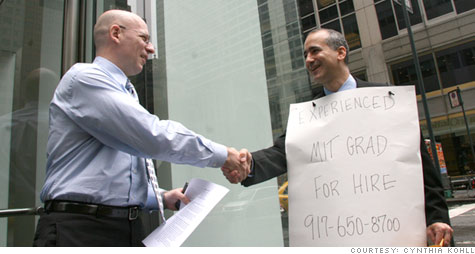 But after making headlines across the globe in 2008, it's hard to shed the image that became synonymous with a financial meltdown and ensuing recession.

Persky was an investment banker who found himself laid off in early 2008, though he expected he'd easily snag a new job with Bear Stearns. But then, in May, the investment house collapsed, taking most of Wall Street with it.

As layoffs mounted, Persky knew he needed to do something different to stand out in a sea of job seekers. "After being out of work for six months, I decided to do something a little more creative, so I put on a sign board and went out to Park Avenue to get some leads."

His sign, which read "Experienced MIT Grad For Hire" with his name and contact information, launched a media frenzy.

Despite only logging a few hours outside with his sign over the course of one week in June, the story spread around the globe.

But yet, no job offers.

It wasn't until after Lehman Brothers declared bankruptcy in September that he finally got a job, with a New York City accounting firm. At the same time, Persky started writing a book on job hunting and sold the proposal to a major publisher.

"Everything was moving forward nicely," he says.

But the economy continued to sputter, and Persky was laid off after only five months.

Persky is one of the 13.5 million people still out of work in the U.S.

Aside from the short stint in an accounting firm, he also tried to start his own consulting business and even launched an iPhone app, but nothing has stuck.

Persky downsized substantially, even staying with his sister temporarily before moving to a smaller apartment in New York. He collects unemployment, picks up consulting projects when he can and keeps his expenses low, while working on his newest business idea.

Now, he is trying to get a digital displays business off the ground. His company, called Twisplays, makes LED signs that show real-time Twitter streams for use in stores, restaurants, offices or trade shows.

And even though economic conditions in the U.S. have improved since his days with a sign board, Persky is now struggling to find a retail customer or investor to support his new business.

Still, he his hopeful his latest venture will help him back on his feet. "I will get there," he says.

How the economy is really doing