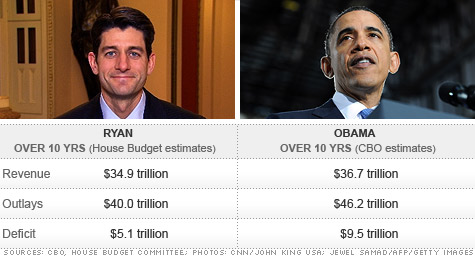 NEW YORK (CNNMoney) -- Cut spending by $6 trillion over the next decade. Lower the highest tax rate to 25%. Radically overhaul Medicare and Medicaid.

Paul Ryan is not messing around.

On Tuesday, the fiscal guru of the House GOP majority released his 2012 budget proposal -- the first real indication of how House Republicans want to tackle the country's long-term budget shortfalls.

Called "The Path to Prosperity," Ryan's budget resolution is as much a political treatise as it is a fiscal blueprint.

"[This resolution] disavows the relentless government spending, taxing, and borrowing that are leading America, right at this moment, toward a debt-fueled economic crisis and the demise of America's exceptional promise," the resolution reads.

Ryan put it more bluntly in a press conference. "This isn't a budget. This is a cause."

It also estimates that $2.5 trillion in revenue will be raised, leaving a deficit of just under $1 trillion.

But over the course of the next decade and beyond, the House GOP resolution aims to reduce spending, taxes and debt.

Reducing deficits: Relative to accrued debt under the president's 2012 budget request, the measure would reduce the debt by $4.4 trillion over 10 years, Ryan estimates. Relative to the more stringent CBO policy assumptions, it cuts the debt by roughly $1.7 trillion.

Nevertheless, the House GOP plan would still add $5.1 trillion to accrued deficits over the decade.

The House Budget Committee, however, estimates its plan would achieve balance -- where revenue matches outlays -- by the late 2030s.

Budget resolutions, it should be noted, are initial frameworks for a months-long budget process and are not subject to an official analysis or score by the by the nonpartisan Congressional Budget Office.

CBO often comes up with different cost-and-savings estimates than lawmakers because it measures the numbers off of a different base. For instance, the CBO counts tax cuts that are not "paid for" as adding to deficits, where the House GOP and to some extent Obama did not.

Reforming the tax code: The House GOP plan would reform the tax code without raising more money than the current system. It would reduce the number of income tax brackets, lower the top rate for individuals and corporations to 25% and eliminate many tax breaks.

The president's bipartisan fiscal commission and another highly regarded bipartisan commissions of outside experts also called for tax reform that would lower rates. But unlike the House GOP, their proposals raised more revenue than the current system and a portion of that added revenue is earmarked to reduce U.S. deficits.

Until tax reform is enacted, Ryan's plan calls for the Bush-Obama tax cuts to remain in place for all taxpayers after 2012.

Putting the reins on spending: Ryan's plan would reduce federal spending to below 20% of the economy by 2015. That would be below the 20.7% average over the past 40 years.

And it would slice non-security discretionary spending to below 2008 levels. Ryan said that goal would be achieved in numerous ways. Among them: reforming farm subsidies, shrinking the federal work force and targeting inefficiencies at the Pentagon.

Plus, the GOP plan would introduce "enforceable" caps on spending.

Spending on entitlements is one of the biggest drivers of the country's future debt.

Starting in 2022, the House GOP resolution would convert Medicare -- the health care program for seniors -- into a voucher program, or what Ryan calls a "premium-support model."

Under such a system, seniors would choose from a Medicare-approved list of private insurance plans and the cost of their chosen plan would be subsidized in part by the federal government.

Wealthier seniors would receive less of a subsidy than everyone else.

"The open-ended, blank-check nature of the Medicare subsidy threatens the solvency of this critical program and creates inexcusable levels of waste," Ryan wrote Tuesday in a Wall Street Journal op-ed. "But because government should not force people to reorganize their lives, its reforms will not affect those in or near retirement in any way."

Critics of similar proposals contend, among other things, that they effectively privatize Medicare and may mean seniors no longer will be guaranteed a certain set of benefits as they are under the current fee-for-service system.

Under the House GOP proposal, Medicare would offer more assistance to lower income seniors for their out-of-pocket costs and would increase payments for those who are sick if their condition worsens. The eligibility requirements for such increasd assistance, however, were not clear.

The resolution would also convert the federal government's payments for Medicaid -- the health program for the poor and disabled -- into a block grant to be allocated among states. Currently, federal payments to states are determined by a formula.

Putting kibosh on health reform: The resolution assumes the repeal and defunding of the 2010 health reform law, which both created new federal subsidies to help low- and moderate-income Americans buy insurance, expanded Medicaid and also instituted a large number measures aimed at creating cost-and-efficiency savings in the health care system.

For instance, the House GOP plan assumes the tax increases under the new health law -- which the budget committee puts at $800 billion -- are eliminated.

The fight ahead: Ryan's budget proposal is expected to generate a full-throated debate about the nation's long-term debt crisis -- the solutions for which bitterly divide Democrats and Republicans.

At the same time, Congress has been unable to agree to a budget for the current fiscal year, which began six months ago.

For their part, House Republicans are still divided over the magnitude of spending cuts for this fiscal year. Some lawmakers are pointing to the 2012 budget as the place where Republicans can offer the kinds of major spending cuts and reforms that the newest and most conservative members are miffed they are not getting in the 2011 fight.