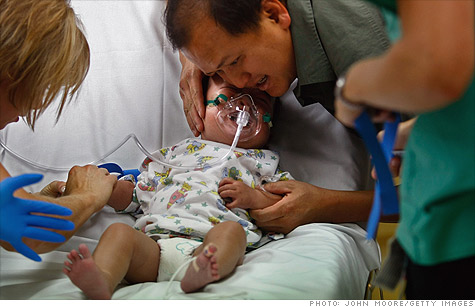 WASHINGTON (CNNMoney) -- House Republicans propose to trim more than $1 trillion from the deficit over the next decade by reworking and cutting Medicaid, a program of public health care coverage for children, pregnant mothers, disabled and poor.

House budget chief Rep. Paul Ryan is so far the only Republican who has offered concrete proposals to reform Medicaid. His proposals are controversial and face a tough uphill battle with Democrats in the White House and Senate.

In their 2012 budget unveiled Tuesday, Republicans would get savings from Medicaid in two ways.

-- Reversing current health care laws: Due to the health care reform law approved last year, Medicaid is slated for a big expansion to cover millions of uninsured who currently make a little too much to qualify for the program. The Congressional Budget Office has previously estimated the expansion of Medicaid, by itself, would cost $430 billion over the next 10 years. However, repeal of the entire health care plan increases budget deficits.

The Congressional Budget Office suggested in November that a similar move using a block grant system would save $180 billion over the next 10 years.

But the House GOP's plan goes much farther and would cut an estimated $771 billion over the next 10 years. Part of the reason for the big savings is that Republicans would also limit the rate that Medicaid spending grows to only reflect changes in population and prices.

Experts say that such a large number in savings would ensure curtailed benefits for the nation's poorest.

The CBO, which issued an analysis of the revamp Tuesday afternoon, agreed.

"The large projected reduction in federal payments would probably require states to reduce payments to providers, curtail eligibility for Medicaid, provide less extensive coverage to beneficiaries, or pay more themselves than would be the case under current law," the CBO said in its analysis.

Currently, Medicaid works as a entitlement program, guaranteeing health coverage for the those who qualify, who tend to be children, pregnant mothers, disabled and poor elderly in facilities like nursing homes.

The way it works now is that Medicaid funding is based on a formula that matches federal dollars with state dollars. Republicans and some deficit hawks say the current system encourages states to spend more than they should, to "game" the system and capture more federal dollars.

Spending crunch in 2020: Why we need to fix Medicaid

Republicans want to unlink the federal and state dollars and usher in a block grant system, in which the federal government would give each state a lump sum of dollars to do with as they please.

Republicans didn't give details on how they'd distribute the lump sums, but they said that giving grants would encourage states to find savings on their own, ending what their statement calls "an onerous, one-size-fits-all approach."

"What a hard block grant does is force the state to pay for those benefits today rather than kicking that can down the road and making future generations pay for it," said Michael Cannon, director of health policy studies at the Cato Institute, a libertarian think tank.

The concept of using block grants has been proposed and shelved several times over the past 30 years.

Independent Medicaid experts believe grants aren't as responsive as the current system when it comes to helping the needy through unplanned swings in the economy or health epidemics, said Robin Rudowitz, associate director of the Kaiser Commission on Medicaid and the Uninsured. For example, the current formula allowed Medicaid rolls to swell with the recession.

The other problem, some argue, is that there's the potential for cash-strapped states to use health care dollars to plug other holes in their budgets instead of helping their poor, said Judith Solomon, vice president for health policy at the left-leaning Center on Budget and Policy Priorities.

"This path builds upon those Rivlin-Ryan plans," Ryan said Tuesday.

But in testimony last month, Rivlin she didn't think that block grants would work as a "solution by itself" unless there are safeguards enacted to prevent "states from just bailing out of the program."

It's unclear whether the GOP plan would offer such safeguards.

Help Desk
Track testing tires to find the best
Find out how TireRack tests and reviews tires and why choosing the right ones for your car is so important. Play
Markets
Data as of 1:42pm ET
Data as of 2:44pm ET
Sponsored by
Sponsors
Sections